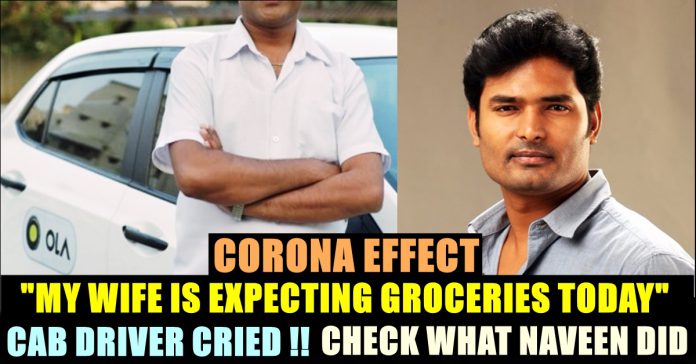 This corona outbreak has turned the world upside down indeed. As government has suggested every place which requires public gatherings to get closed, workers who are working for daily wages are getting suffered in big time along with the world’s economy. A heart breaking incident shared by Tamil filmmaker Naveen tells us the exact state of daily wagers.

Naveen who directed “Moodar Koodam” is very much interactive with his followers in Twitter. Being followed by more than sixty thousand Twitter users, Naveen shared a incident he came through lately. Naveen, in his post, said that a cab driver in whose cab he travelled cried in front him saying that Naveen was his first customer in 48 hours. The cab driver’s wife is waiting at home, expecting groceries from her husband. “This virus is gonna hit us from so many ways but the people who depend on daily income are gonna get hit the most. I gave the guy an extra 500. Obviously its not a big deal for most of us which means we should do it more. He showed me that he has been driving around 70 kilometres since his last customer. Please pay your cab drivers, street vendors etc a little more. You might just be their last customer for the day” the post Naveen shared said.

This post of the filmmaker received widely positive replies from his followers who also asked other to help the poor and needy. Check out some of the replies he received below :

More than Ten thousand people died due to Coronavirus across the world so far. To prevent Coronavirus from spreading across Tamilnadu, chief minister Edappadi Pazhaniswamy ordered to shut down all the Cinema theatres, malls, schools and colleges. Stadiums, Clubs, bars, Resorts are also going to get a shut down till 31st. The state government advised people not to plan for trip utilising the holidays as it is a measurement taken to avoid travellings. It also requested citizens to avoid gatherings and to avoid crowding in places like temples, churches and mosques.

Comment your views on the important message conveyed by Naveen at this situation !!