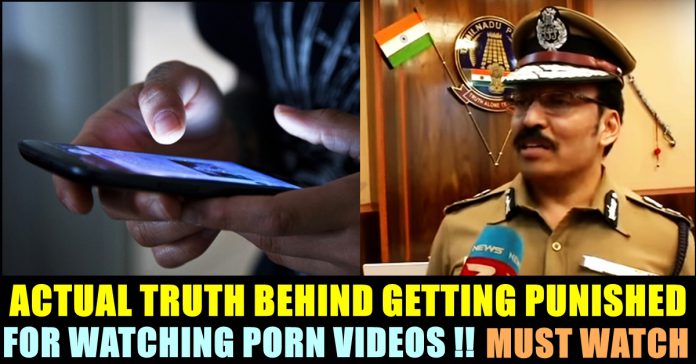 “It came to our knowledge that most number of people from Chennai watched porn films in a large scale. Those who involved in watching or keeping videos related to child pornography in their cell phones or laptop are going to be punished with appropriate law. It is a serious offense under the sections IT and POCSO. Now we Tamilnadu police are preparing a list on those who watched such videos and actions will be taken soon. If the crime against an individual is proven, chances for 3 to 7 years of Jail sentence is possible” he said to News 7. who also added that the report regarding the same will be sent to Central government.

Watch the video of his interview here :

The police officer reports that most of the obscene videos are shared through Whatsapp and says that they will identify those who spreads such videos with proof. “I request youth of this city, not to watch child pornographic videos even in a sportive manner. I ask you to delete such videos if you are having it phone. In these 2 days, more than 50,000 links were taken down. One should not have such videos even as a cartoon. Let us respect women and children which is our culture” says ADGP Ravi to the press.

Though Iyan Karthikeyan reports that visiting a website which contains Child pornogrpahy is also a crime. “In October month, CBI took action against those who encouraged child pornography through Whatsapp. They derived an original complete list of people who encouraged it in the prominent cities of India and appropriate actions were taken against them” he added.

Through this we can clearly understand that unless or until one really acts in a way of encouraging sexual crimes against children, they could not be punished under any kind of law. What do you think on this move of Chennai Police ?/ Comment your views below !!