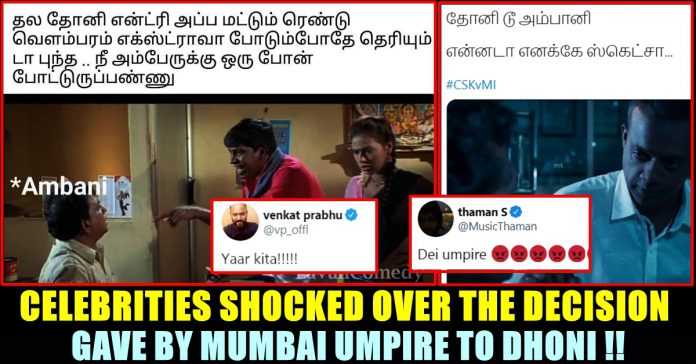 In the first encounter between Chennai Super Kings and Mumbai Indians, the former won the match with ease and broke the losing streak against the blue team as they lost all the four matches in the previous season of IPL. Chasing a total of 162 runs, The MS Dhoni led team finished it with 4 balls to spare. With the half centuries of Ambati Rayudu and Faf Du Plessis, Chennai managed to post a comfortable win at the end.

In the feel good one sided match, a number of uncanny incidents such as Murali Vijay refusing to go for a review despite of Faf’s insistence, Dhoni going for a review in the second to last over after given out by the umpire took place. Both the incidents became a subject to debate in social media platforms. When a set of CSK fans trolled and mocked Murali Vijay for his lethargic efforts in fielding and walking away without reviewing while batting, other set of fans started trolling the umpire who gave out to Dhoni when he was not out.

Check out the glimpse of social media reactions for Murali Vijay’s performance in the inaugural match of IPL :

No one.
Murali Vijay: pic.twitter.com/HU8O9Y2gDF

Murali Vijay after ball hits his pads which is a feet away from the stumps 😂😂 pic.twitter.com/XVVFOIU9uL

However, the way Umpire gave out to Dhoni on the first ball he faced, made a number of cinema celebrities to react. When umpire gave out to Dhoni, the CSK skipper immediately went for a review and succeeded. Director Venkat Prabhu posted a tweet saying “Yaar Kitta!!” (with whom you are messing ?) whereas music director Thaman, comedy actor Sathish expressed their instant emotions through tweet. Actor Vikram Prabhu lauded the accuracy of Dhoni Review system as well.

Here’s some of the other reactions :

Umpire gave out on this 😂😂😂😂 Ambani extra players activated. pic.twitter.com/ZxhxMwuIAL

Comment your views on the way Internet is reacting over the inaugural match of IPL 13 !!