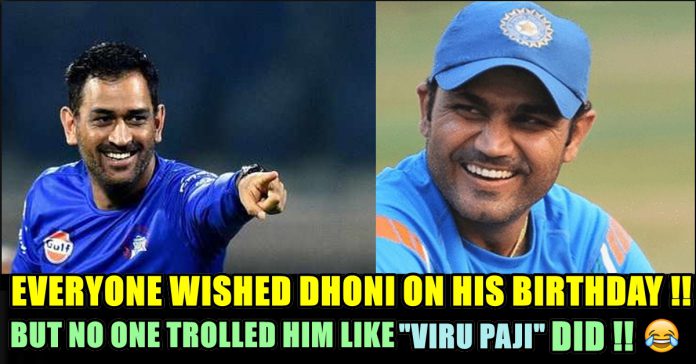 Former Indian skipper Mahendra Singh Dhoni on Saturday turned 37 and warm birthday wishes poured in for him not just from the cricket fraternity but also from the fans all around the world.

Dhoni, who made his international debut in 2004 in an ODI against Bangladesh, has so far played 500 international matches for India becoming only the third Indian cricketer after Sachin Tendulkar and Rahul Dravid to do so. Playing his 500th international match, the veteran warhorse etched another record against his name as he becomes the first player in the world to play a maximum number of T20 International matches without being adjudges LBW.

However, Team India were unable to give a victory gift to Dhoni as they lost the second T20I of the ongoing three-match series against England at Sophia Gardens in Cardiff. Dhoni contributed 32 runs (24 balls) in India’s 148 which England chase down with five wickets in hand.

Here’s the celebrities who wished Dhoni on his birthday :

Walking out of your 500th international match & gracefully walking into the blessed day of India, when a legend like you was born! Wish you a very Happy Birthday brother @msdhoni 🎂You have been my inspiration & will always be! I cherish all our good times! #HappyBirthdayMSDhoni pic.twitter.com/YinwMNSAgz

Wish you a very happy birthday, @msdhoni and congratulations on playing your 500th International match. May you continue to give joy and happiness to people around you and beyond. pic.twitter.com/gIUkaKxgsW

But Virendra Sehwag took to the micro-blogging site Twitter and posted a photo of India Vs New Zealand 2nd T20I match played in 2017 in which Dhoni can be seen doing a leg-stretch to save his wicket.

The caption that he wrote is, “#HappyBirthdayMSDhoni . May your life be longer than this stretch and may you find happiness in everything, faster than your stumpings. Om Finishaya Namaha !”

#HappyBirthdayMSDhoni . May your life be longer than this stretch and may you find happiness in everything, faster than your stumpings. Om Finishaya Namaha ! pic.twitter.com/zAHCX33n1y

This tweet from Sehwag got wide response from the fans. Comment what do you think on this !!