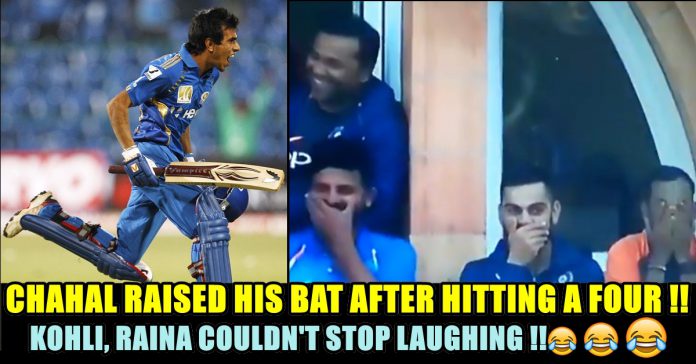 The Indian team lost the second ODI against England at Lord’s stadium by a big margin of 86 runs and now the series is in a balance state of 1-1.

However, there were some moments that brought smile on the face of everyone; for example, it was the guy proposing a girl in the first innings and Indian cricketer Yuzvendra Chahal did his best to entertain the crowd in the second innings.

The crowd was getting bored and it was difficult for the Indian batsmen to score runs on the slow pitch, even MS Dhoni was not able to score at a good speed. The credit has to be given to the England spinners, Adil Rashid and Moeen Ali who bowled wonderfully for making the lives of Indian batsmen hell. Dhoni was out in the 47th over and after this, Yuzvendra Chahal came on the ground. England was hoping to finish the match soon but Chahal was in no mood to return early.

He raised his bat towards dressing room as if he has scored a half-century just after hitting his first ODI boundary by playing a good straight drive on David Willey’s bowling in the 48th over.

Here is the video:

As Yuzvendra Chahal raised his bat, everyone in the dressing room started laughing and they laughed more when later he was trying to take a run but the batsman on another end refused and Chahal dived to save his wicket.

His actions entertained not only his team members but also fans who had nothing else to do other than waiting for the match to end. The third and the last ODI will be played at Headingley and it will also be the decider of the series.