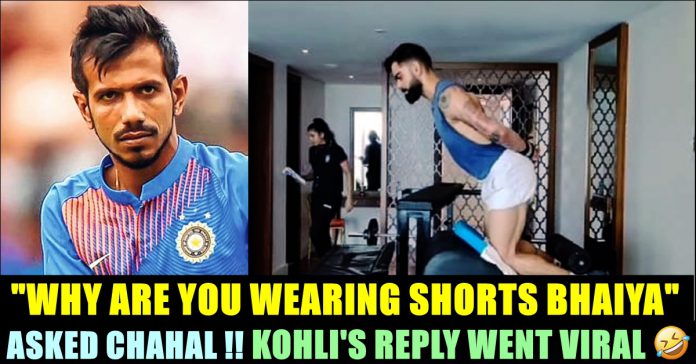 The online banter between Yuzvendra Chahal and his team mates from India and Royal Challengers Bangalore has always grabbed headlines due to the leg spinner’s cheeky attitude. He never cared about the millions of people who are following him in social media and would personally attack some of the top tier cricketers such as Rohit Sharma and Virat Kohli irrespective of their fans and followers.

Most recently, when Kohli uploaded a work out video by wearing T-shirt and shorts, the soon-to be married spinner asked him why he was wearing shorts only receive a terrible reply his captain.

Virat Kohli who holds the highest number of followers for his Instagram account, posted a video of himself working out on Wednesday, a day before his match against Punjab. He who enjoys 80 million followers in Instagram, wrote “Putting in some daily work to prepare for this heat 🔥. Btw pls tag and ask Chris Morris why he’s making those sounds in the background 😂” as caption for his post.

Check out the video here :

Putting in some daily work to prepare for this heat 🔥. Btw pls tag and ask @tipo_morris why he's making those sounds in the background 😂.

Yuzi Chahal, trespassed the comment section of his post of Kohli and questioned why he was wearing the shorts. “Why you are wearing my shorts bhaiya 🙈 👀😋 @virat.kohli” his comment read.

Kohli, in a way of giving him the perfect answer, replied by saying “because you never wear them”

Chahal always tried pulling legs of his captain and Kohli never shied away to give him the replies he deserves. In a recent interaction with AB DE Villiers, Virat Kohli trolled the leg spinner by saying that Chahal is an “absolute clown” for the way he behaves in his Tik Tok videos.

Chahal who got engaged with youtuber and choreographer Dhanashree Verma recently, never failed to entertain us in social media and in field as well. He grabbed the man of the match award in the first match of RCB against SRH for his 3 wickets.