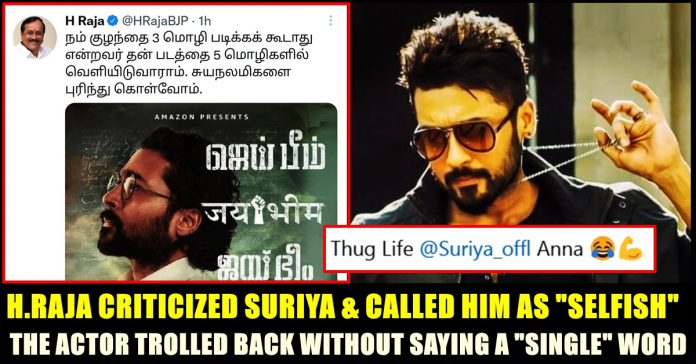 H. Raja of BJP party who is known for grabbing headlines by criticizing leading Tamil stars, recently came up with tweet mocking actor Suriya for releasing his film “Jai Bhim” in several languages including Hindi. Raja said that Suriya is restricting his children not to learn Hindi language but releasing his film in the same to consume revenue. In return, Suriya, instead of making a valid reply or explanation, “liked” his tweet and left his fans to handle the rest. Generally, H.Raja’s tweets against Tamil films and its lead actors would be considered as one of the promotional activity of the film.

Politician H. Raja, in a tweet that was uploaded on 3rd of November, said that Suroya is a selfish as he is releasing his film in 5 languages after influencing his children not to study three languages. Check out his tweet below :

Many twitter users schooled Raja in the comment section, saying that he is only providing his film in five languages to make the people of the respective regions to watch and not forcing Hindi speaking audience to watch the film in Tamil or the vice versa. Meanwhile, after seeing the tweet of Raja, actor Suriya, instead of putting efforts to reply or give clarifications, simply “liked” the tweet and moved on to make the tweet reach wider.

The actor, probably would have thought that the tweet of Raja will help the film’s promotion before “liking” it. Check out some of the reactions his online activity received :

Suriya liking this tweet shows how stupid the tweet is! Releasing a movie in 5 languages mean anyone can watch it comfortably in their mother tongue! There’s nothing selfish here @BJP4India @BJPFails_ @Suriya_offl @HRajaBJP #JaiBheem pic.twitter.com/Fl2SxogziK

That one like by @Suriya_offl anna symbolically means he has sent a box of Burnol & Vaseline to @HRajaBJP‘s house to apply on his back!