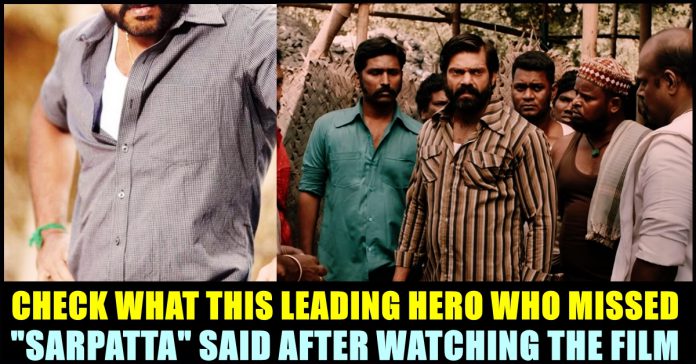 It is very well known that Suriya was approached by Pa. Ranjith to play lead in “Sarpatta Parambarai” prior Arya. Due to unknown reasons, the actor couldn’t play “Kabilan” in the period sports drama. Pa. Ranjith, in an interaction, revealed that he was planning to do the film right after “Attakathi” but couldn’t do it due to the practical constraints at that time. Now, a video of actor Karthi talking about himself and Ranjith doing “Sarpatta” together at a function that took place to promote “Madras” years back got resurfaced. It is notable that the actor lauded Ranjith through his official twitter handle after watching the film.

“Sarpatta Parambarai” which focusses on a boxing clan that was successful at one period, facing down fall due to a raise of a couple of star boxers namely “Vembuli” and “Dancing Rose” from the opposite clan. “Kabilan”, an ordinary daily wager who is an ardent fan of the game, happens to enter the podium to save the pride of his clan and his master “Rangan”. With Arya playing the lead role, an ensemble cast that includes Pasupathy, John Vijay, Dushara Vijayan, Kalaiyarasan, Sanchana Natarajan, John Kokken, Shabeer, Anupama Kumar, Kaali venkat playing the supportive roles.

With majority number of positive reviews, the film is being widely watched by the fans across the globe. Characterizations and Castings are being highly lauded by the audience and critics. The film is also being appreciated for its art work as many could be seen lauding the period drama for bringing the mid 70s in front of their eyes.

Many influential personalities from film industry lauded Pa. Ranjith for pulling off “Sarpatta” with utmost perfection. Meanwhile, reports surfaced revealing about actors who missed to play some of the notable roles in “Sarapatt”. Veteran actor Sathyaraj was initially approached to play the “Rangan Vaathiyar” role, says reports and a media portal said that the actor wished Arya through phone call and regretted missing the opportunity to play the powerful character.

Video of actor Karthi talking about himself and Pa. Ranjith discussing on collaborating for “Sarpatta” during “Madras” times resurfaced in Internet as well. “We were planning to do a film before “Madras” named “Sarpatta”. Main intention was to work with Ranjith” the actor could be heard saying.

After watching the film, Karthi came up with a tweet writing “Sarpatta holds our attention from the very beginning and transports us to old madras while keeping us in wonder. Each character is so fascinating. Congratulations to the whole team. Immense hard work and success well deserved!” and tagged actor Arya, Director Pa. Ranjith, Music director Santhosh Narayanan and actor Pasupathi.

#Sarpatta holds our attention from the very beginning and transports us to old madras while keeping us in wonder. Each character is so fascinating. Congratulations to the whole team. Immense hard work and success well deserved! @arya_offl @beemji @Music_Santhosh #PasupathySir

Comment your views on Karthi playing the role of “Kabilan” in “Sarpatta Parambarai” !!