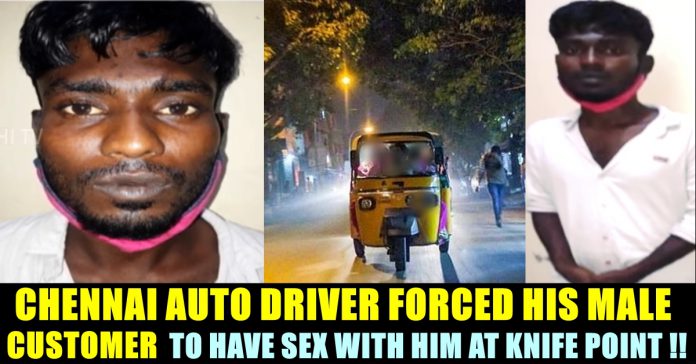 An alleged serial sexual offender named as Charles got arrested by Chennai Police after he forced an elderly man to have sex with him. The incident came to light after the victim approached Police and made a complaint against the accused who also snatched his belongings after threatening him at knife point to involve in homosexuality.

The elderly man who resides in Arumbakkam, travelled in the auto of Charles who lives in Aminjikarai. At that time, Charles who was driving the auto, stopped the vehicle and threatened the elderly man to have sex with him. Charles threatened him with a knife, according to reports.

When the old man denied, Charles attacked him with his knife and fled from the spot after snatching the money and cell phone of the victim who immediately seeked Police assistance. Acting by his complaint, Police officers traced Charles with the help of CCTV footages and his cell phone signal.

After arresting Charles, Police confisticated his Auto, cellphone and knife before imprisoning him.

This news has created huge outrage in social media platforms with enormous number of men reacting to it.

Historically, rape was thought to be, and defined as, a crime committed solely against women. This belief is still held in some parts of the world, but rape of males is now commonly criminalized and has been subject to more discussion than in the past.

The rape of males in India is commonly underreported. For this reason, some activists and research organizations, including Jai Vipra at the New Delhi think-tank Centre for Civil Society, argue that the phrasing of rape laws should be gender-neutral