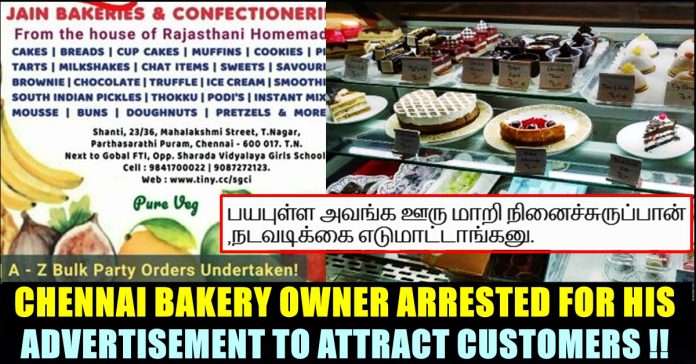 A Chennai based bakery owner arrested by Police officials for his advertisement in Whatsapp while doing business through online. In this lockdown situation, people are preferring to purchase essentials only through online. This 32 year old who runs his shop at Parthasarathi Puran in T nagar area, arrested for outraging religious feelings, according to police.

Prashanth named his bakery as “Jain Bakeries and Confectionaries” and involved in online selling due to the lockdown crisis which took place due to Coronavirus. Prashanth used to bake items in his home to deliver it to customers through online apps. In one of his advertisements for his bakery, Prashanth reportedly mentioned “Made by Jains on order, No Muslim staffs” which got circulated in Whatsapp groups. The post also started surfacing in other social media platforms such as Twitter and facebook and became subject to severe criticisms.

India Prashanth, the owner of a bakery, for outraging religious feelings and intentionally insulting a community

The advertisement said “made by Jains on orders, no Muslim staffs.” pic.twitter.com/1cq5Nn7D0U

Jain Bakeries & Confectioneries in Chennai which openly ostracised Muslims in WhatsApp poster. Asserting that the food in the bakery was “made by Jains on orders, no Muslim staffs”, the poster drew flak for its attempt to stigmatize a community. #Muslimphobia_In_India pic.twitter.com/zXkbN6R4PJ

Jain Bakeries and Confectioneries owner was arrested for advertising his store with a tagline ‘no Muslim staffs’.

Islamophobia must be weeded out like this before it takes root.#Muslimphobia_In_India pic.twitter.com/UYssGzxHMu

Within hours, Mambalam police took suo motu action against the owner for his insensitive advertisement against a particular religion. However, the staff claimed that he didn’t “intend to communalise”. He said that there was a rumour doing rounds in social media urging people not to buy bakery items made by Muslims which forced him to publish the advertisement to retain his customers. The employees of the bakery claimed that they took the decision after receiving several phone calls from its customers asking them to check if the shop contains any Muslim workers.

Police said that they registered the case and arrested the owner on saturday night under sections 295 A and 504 of the Indian Penal Code. This move from the police also received several reactions in the social media site :

“No orders! No Muslim Staffs!”

Jain Bakeries and Confectioneries owner was arrested for advertising his store with a tagline ‘no Muslim staffs’.

Islamophobia must be weeded out like this before it takes root.#Muslimphobia_In_India pic.twitter.com/IX7kwjBE4c

It is notable that more than 100 former bureaucrats wrote to Chief ministers of states, expressing concern over the “harassment” of police last month. They said that the action of Tablighi Jamaat was “misguided and condemnable”.