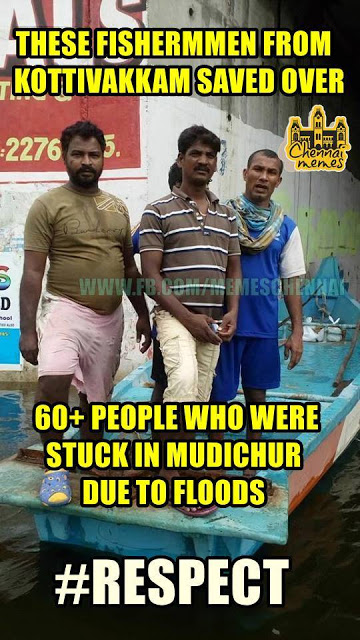 Mother Nature vented out her fury on Tamil Nadu these past few days, flooding many areas and causing severe damages . But amongst such adversities, the undying spirit of Humanity prevailed and ordinary people emerged as heroes. Here are a few of the stories amongst many , that shows the unyielding spirit of Chennaivasis

Because the fishing is not allowed in the rustic sea waters,Fishermen from coastal areas decided to lend hand in rescuing people stuck in floods

Firemen braving the flooded roads- Even during dark hours ,tamizh Nadu fire department did the best efforts to reach the accident spot to rescue the people from calamity.

The NDRF was deployed in the flood hit areas, to evacuate as well as to help in the distribution of flood relief materials

The INDIAN ARMY stepped up as usual during crisis to help the people stranded in floods! Massive respect to them!

Volunteers and NGOs stepped up to reduce the misery of flood affected victims.