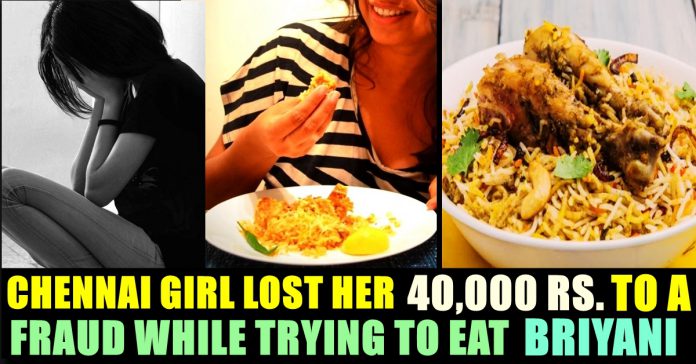 A Girl who belongs to Chennai lost 40,000 of her money while trying to get refund of a Biriyani order that was cancelled in UBER eats. This case created massive alert in the city as the one who responded to her call as UBER EATS customer service employee was a fraud.

According to the report of Indiaglitz, Priya Agarwal who lives in Chennai Sowcarpet went to Vadapalani with her friends and ordered one plate of Biriyani through Uber Eats food delivery app. Unfortunately her order got automatically cancelled. The amount of 76 Rs. she paid for the Biriyani online  was not received by her. In order to inquire about the issue, Priya googled for the customer care service number of Uber eats.

The contact number which was appeared in the google result belonged to a fraud who picked up her call. Priya, who was not aware of it started to share her bank details with the fraud. The person who disguised as the UBER employee reportedly asked her to credit Rs.5,000 to his Google pay as the amount 76.Rs is very low to refund. He promised her that Rs.5076 will be credited to her in the phone call.

Priya who believed it sent him 5,000 through Google pay and waited for her amount to be credited. She didn’t receive the money as expected. The fraud who knows the details of her Bank account asked her to share the OTP number sent to her cell phone and promised to credit the money of her. Unaware of the con, Priya shared OTP for 8 times back to back according to the instructions of the fraud. And later she realized that every time she shared an OTP, 5000 Rs. from her account has been deducted. On the whole she lost Rs. 40,000 to the fraud. She came to know about the truth, it was very late that the fraud ended up the contact from her.

After realizing that it is a fake customer care number, Priya lodged a complaint in Vadapalani Police station and the cops are investigating about the phone number the fraud called from. It is high time for us to be aware of things happening in online, especially while providing details such as Bank details and OTPs to strangers.