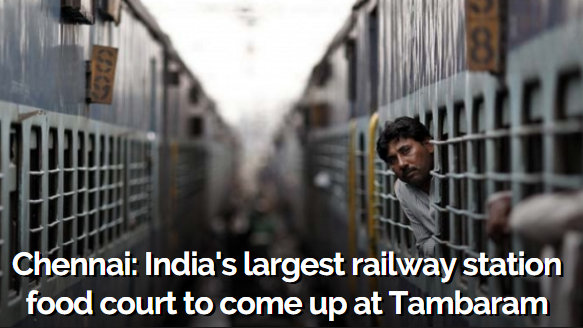 In six months, Chennai’s Tambaram station will have India’s largest railway station food court. There will be at least 25 brands that will dish out Indian and continental food to passengers and others at the station.

The food court will be spread across three areas – the concourse, on the GST side and the Eastern side of the Tambaram railway station – according to a report in Deccan Chronicle. About 1.7 lakh commuters will benefit from this food court.

Senior officials of the IRCTC have told the daily that there will be everything from ‘medhu vada’ ‘appam’ and ‘parotta’ to pizzas and burgers here. It will take six months for the food court to be constructed and N Gopinathan, chief project consultant, has stated that they expect Rs 5 to Rs 7 lakh sales daily.

The food court will be spread over 15000 square feet and be run and operated by JS Caterers, states the daily. JS Caterers are an Erode-based catering chain and have won the financial bid at Rs 4 crore per annum for the next 12 years.

Praveen Khatri who is one of the designers of the food court told the daily that they will start with 14 counters at the basement of the main food court. The outlet will be air-conditioned and people can have coffee at the stands at the entrance.