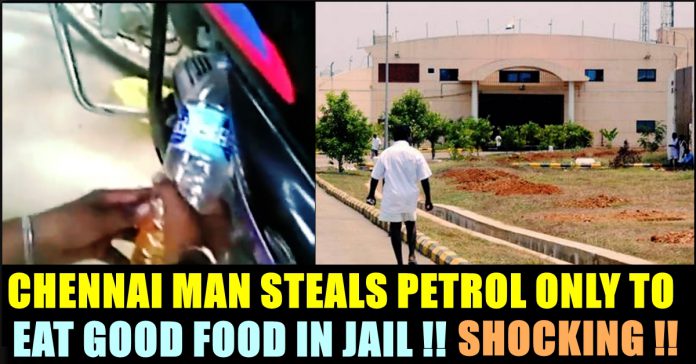 Jail is meant to punish sinners to make them realize what they done is wrong. The main purpose of a jail is to reform criminals in order to reduce to number of crimes that is taking place in the society. But the purpose completely failed in the case of 52 year old Gnanaprakasam who resides in Perungalathur. His time in jail only made him to do more crimes as he felt very comfortable in spending time inside it. During interrogation, it is revealed that Gnana wants to be in jail to live a happy life as he wish. Gnanaprakasam last time steal a CCTV camera to get caught by police in order to go to jail. His plan worked at that time. However he was released in June 29 in bail only to start missing his life in prison.

To go to Jail again, Gnana Prakasam planned to stole a bike to get arrested by police. He stole a bike from Kailasapuram First Street in West Tambaram. He made sure that a CCTV camera caught him in the act and started roaming the city. Whenever the bike ran out of fuel, he stole petrol from vehicles parked on the road, his statement read. He roamed all over the city to get caught but unfortunately it doesn’t go well according to his plan. He then steal petrol from a bike on July 6 in a police protected place.

This time it worked and he was caught red handedly by the people around who handed  him over to the police. When police questioned about him about the crime, Gnana Prakasam revealed the desperate reason behind his act. He also confessed the police that not only petrol, even the bike was also a stolen one. According to the statement of Chennai Police commissioner, P. Ashokan, Gnana Prakasan was not cared by his family members. “He said that he is missing prison food. Obviously he was not cared very much by his family members which made him unhappy enough to make this weird decision.” The accused even told the police that he is very much happy while staying in prison where he gets 3 times food on time. “Unlike home, no one here calls me lazy” stated Gnana Prakasam to the police. He even earned number friends inside the prison with whom he spends most of the time. Gnana Prakasam is currently in Puzhal prison for the crimes he committed.