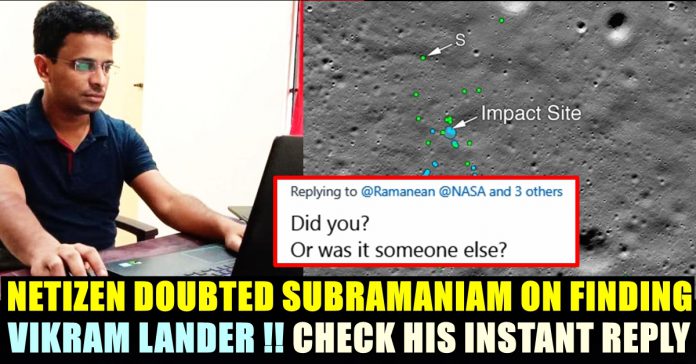 India’s first attempt to land on the Moon may have gone off-script but the ambitious Chandrayaan 2 mission has been far from a flop. With a mission life of at least one year, the Chandrayaan 2 lunar orbiter remained in operation and continued to study the Moon from afar, carrying out experiments to map the surface and study the Moon’s outer atmosphere.

Now to our surprise, a Chennai based techie Shanmuga Subramaniam has helped NASA to find the location of Vikram Lander. In a post on its website early on Tuesday, NASA has said its moon mission has discovered the remains of India’s Vikram Lander and identified the debris spotted by Subramanian with an “S” on its image. Subramaniam works as an IT architect who creates apps websites in his free time.

While talking to Hindustan Times, Subramaniam said that he believes that the crash it occured made more people get interest on it. “I don’t think that Vikram Lander would have made much impact among the public if it landed successfully in the moon” he said.

“I searched around the north of the landing spot and found a tiny little dot. When I compared it to LRO images of the site from the last 9 years, the debris was located and I reached out to NASA,” Shanmugham added.

On going through the comment section of his tweet regarding the same, we can see one of a twitter user asking him whether it was found by himself or it was did by someone else. To this tweet Subramaniam replied by saying “It was only me”

This discovery of Subramaniam indeed made the people of Tamilnadu proud who started lauding the 33 year old techie for his effort. Check out some of their reactions below :

I commend Chennai-based programmer Shanmuga Subramanian who had used lunar images to trace #VikramLander on the Moon's surface.

Was also pleased to see confirmation and appreciation of this discovery by NASA and I wish @Ramanean the very best for his future. https://t.co/qs4fTYrEWO

As Nasa found the #VikramLander with the help of an Indian programmer
Meanwhile whole India rn : #Chandrayaan2 pic.twitter.com/3WBJVlG1cQ

Let us wish for the pride of our nation to discover more in future !!