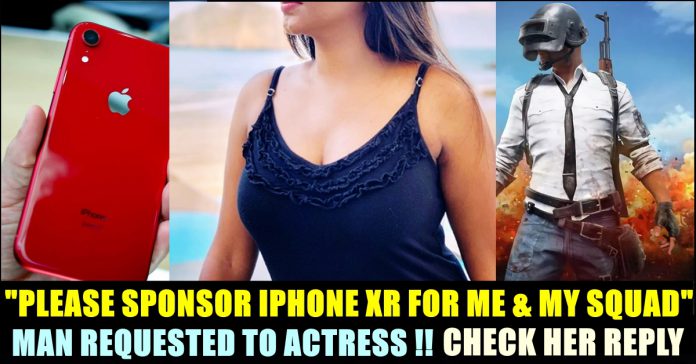 People trying to communicate with female actresses personally has became common nowadays as social media applications such as Instagram, Facebook, Twitter contains the facility. We have seen many cases of actresses becoming the victim of online trolls and abuses. But now, a Chennai man named as Rajkumar has requested actress Shalu Shamu to buy his crew iphones to play Pub-G without interruptions.

The craze for PlayerUnknown’s Battlegrounds (PUBG) i.e an online multiplayer battle royale game is phenomenal in India. The game is always a hot topic of discussion on social media as people in general and memers are always talking about it. The game has built a die-hard fan following for itself and people are so crazy that they are proudly ignoring their family members and partners for it. With time, the passion for this game is only growing and touching new levels. To our surprise, there are tournaments taking place in many cities for this game, in which people are participating with sheer interest.

Now, one Rajkumar has requested this Varuthapadatha Valibar Sangam actress to buy him a bunch of iphones as he couldn’t play the game in android without interruption. The actress who is very much active in Instagram has been engaging her followers by updating about her daily routines and by uploading her photos from her various kind of photoshoots. In a similar way, she posted the screenshot of this message she received with a caption saying “Comedy of the day”

You Can’t Go Back & Change The Beginning, But You Can Start Where You Are & Change The Ending. PC : @reethikaashokkumar #shalushamu #blackgirlmagic #simpleme #actresslife

The screenshot Shalu shared shows a guy introducing himself as Rajkumar from Chennai. He says that he is a competitive player in PUB-G and he has a squad to play this game regularly. “We don’t have proper mobile phones to play this game. If we get sponsorship for mobile for our team, we can show excellent performance in tournaments. Each of our 5 members need apple iphone XR to perform well in the game. Because the game lags in Android mobile. The lowest cost iphone in which the game can run smoothly is iphone XR. I hope to get a positive response from you mam. Thank u.” the screenshot shows.

Check out the screenshot she posted below :

She, however didn’t the Instagram handle name of the user by crossing it. The actress who exposed few guys who abused her in inbox in previous occasions, has made this text she received public as well. (Also Read : Actress Exposed Guy Who Sent Obscene Messages To Her !!) Shalu Shamu who is known for appearing in Varutha Padatha Vaalibar Sangam movie as heroine’s friend, was last seen in Mr.Local in a small role. She is currently enjoying two and half lakh followers in Instagram and is expected to appear in the sequel of adult comedy horror film Iruttu Arayil Murattu Kuththu.