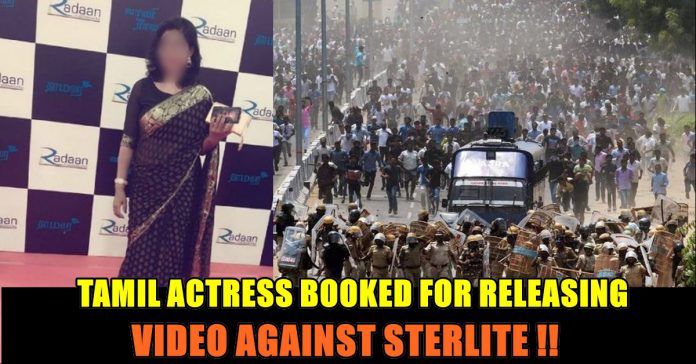 Residents of Tuticorin have been demanding closure of the smelter for the past 100 days, and had announced they would take out a march to the Tuticorin District Collectorate on Tuesday. The district has been witnessing several protests by locals and others against the plant and its proposed expansion. Protesters have alleged that the smelter was polluting ground water in their area. An activist group has accused pollution board of allowing the company to operate its smelter with shorter chimney stacks than permitted which helped the company reduce costs but harmed the environment. Tamil serial actress Nilani released video condemning the brutal killing of the Tuticorin Sterlite protesters in police firing. She herself was dressed as a cop as she was shooting for a serial and she said she was ashamed to wear the costume. Nilani has added that if she could not caught up in the shoot she would have headed for the southern Tamilnadu city and participated in the protest. She landed in trouble after posting a video over Sterlite protest in Tuticorin in Tamilnadu. The Police of Vadapalani has filed a case against Nilani under four sections and it is reported that she could be arrested any moment. The movement for the closure of Vedanta’s Sterlite Copper plant turned bloody on the 100th day of the agitation as 12 people, including two women and  a teenager, were killed when police opened fire on rampaging protesters in Tuticorin on Tuesday. More than 65 people were  injured in the clashes between agitated protesters and police officials.  Thousands of protesters had gathered to mark the 100th day of protest against the expansion of UK-based Vedanta Resources’ Copper plant in its Thoothukudi factory, Tamilnadu.