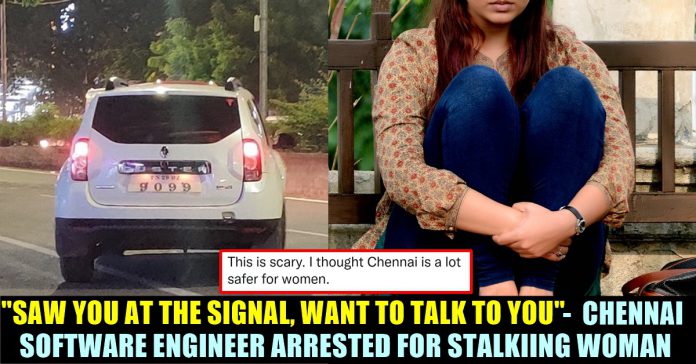 Greeshma Kuthar, a journalist has shared a bizarre incident that has happened to her at Anna Nagar junction in Chennai, Tamil Nadu. She has posted the tweet thread to make people become aware of what has happened and has also asked them to voice out.

Greeshma @jeegujja has been approached by a guy in a junction at Anna Nagar. He has tried to engage in a conversation with her. Greeshma showed no interest and moved with her scooter. But the guy didn’t give up. He went in front of her in his car and again he started arguing with her. Greeshma managed to take a picture of the register number which is when he moved from the place.

Greeshma then went to the traffic police a few meters away asking them to track the perv. They directed her to the Traffic control room. There was no one at the spot. Even after half an hour, no one was available. When she tried opening the shut door a person came out and asked her to wait. Another person came and directed her to K4. She went there and reported everything that happened. Greeshma didn’t reveal that she is a journalist. When she did so while leaving they were ‘jerked up’. The procedures rightly happened the next day.

Greeshma has mentioned in her post that this has happened quite post the 2020 lockdown she herself has got personal experiences in Anna Nagar. Also, she has said that we have to voice out this whenever it happens and seek help from the cop. She has concluded the tweet by telling people affected by these kinds of harassment to direct message her.

only to try arguing with me about why I am not talking to him. He kept blabbering, most of which I didn’t follow cos I was trying to stop my bike, pull out my phone and take a photo of his reg number. He said shit like

I told him that this guy is clearly on a prowl and they should track him. This dude told me to go to Traffic control room at Roundtana. I went there, nobody at the spot. Then I returned there after half hour, still nobody. The room was shut so now I tried opening the door.

get on it immediately as who knows what this guy is trying with another woman on a bike, where? It had already been two hours by now. I didn’t mention I’m a journalist till I was about to leave but when I did, they seemed to jerk up. Got a call from an ib dude after this and

The amount of entitlement reeking from these rich fucks (case in point above) gets to me, more so because they get away with it so easily. Patrolling is not the only way out of this, we need to regularly flag this in addition to getting cops to sensibly/quickly work with us

If you are from Anna Nagar and have faced such instances, or if there is street where this happens frequently, DM me. Even if you are from any other locality and want to flag repeated instances of street harrasment, DM me. Thanks.

The Chennai Police had replied to the tweet of the journalist. They have replied, “Accused was secured immediately and will be remanded soon.”

She has also given an update appreciating the cop on tracking down the culprit. She has also said this is the first time an action has been taken for this. It is also found that the guy is a software engineer who returned from the United States.

tracking him down. He’ll be remanded soon and will be charged under appropriate sections. Want to mention that I’ve lost count of the times I’ve taken trips to police stations in different cities that I’ve lived in (Mangalore, Hyderabad, Mumbai, Delhi etc) for incidents like this

over and over again, why are we still talking about safe streets when we are just going about doing our business? I hope the onus of making the streets and public spaces safe isn’t on our heads till we die. It has to be on the state and on men to make ALL men realise that

the streets need to be safe, accessible and as much ours as it has been overwhelmingly theirs. Since y’all are making it hell for us, it is on you to reflect and identify ways to stop your kind from doing this shit. It’s a simple honest request, please consider it