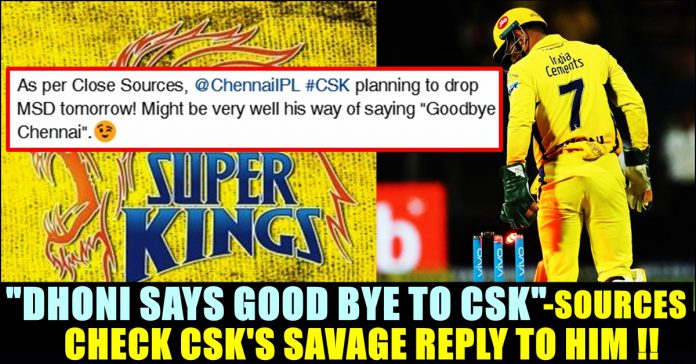 Team Chennai Super Kings is likely to release 5 players from the team today. Chennai Super Kings team is one of the most loved franchise in Indian Premiere League tournament. The team not only loved by the fans who belong to Tamilnadu but also by the fans across the world. The reason behind it is nothing but the captain who leads the team since the inaugural season of IPL.

After serving a two-year suspension from the IPL starting July 2015 for the alleged involvement of their owners in the 2013 IPL betting case (along with Rajasthan Royals), the Super Kings returned to the league in 2018, winning the championship in the comeback season, its third overall to tie Mumbai Indians for the record for most IPL title wins. In the last season, the team went to finals and lost to Mumbai Indians by not able to score 149 runs in 20 overs.

Yesterday Chennai Super Kings posted a tweet regarding the release of 5 players in its own way. The tweet of them read as “Relea5ing tomorrow! 🦁💛”

On seeing this tweet, one of a follower said that Chennai Super Kings is going to drop MS Dhoni. “As per Close Sources, @ChennaiIPL #CSK planning to drop MSD tomorrow! Might be very well his way of saying “Goodbye Chennai”.😉” read the tweet of the user.

As per Close Sources, @ChennaiIPL #CSK planning to drop MSD tomorrow! Might be very well his way of saying "Goodbye Chennai".😉

To this tweet, Chennai Super Kings, trolled back the user in its own way. In a way of denoting that there is no chance for Dhoni’s drop in the team, the reply tweet said “😯 Time to say “Goodbye Close Sources”!” which received more than 2K loves from its followers so far.

Check out some of the reactions to this tweet from the followers of Chennai Super Kings :

Srsly ! This sarcastic wit makes me also doubt it !! 😆😅

Without Dhoni, there is no CSK.

What do you think on this reply from Chennai Super Kings ?? Comment your views below !!