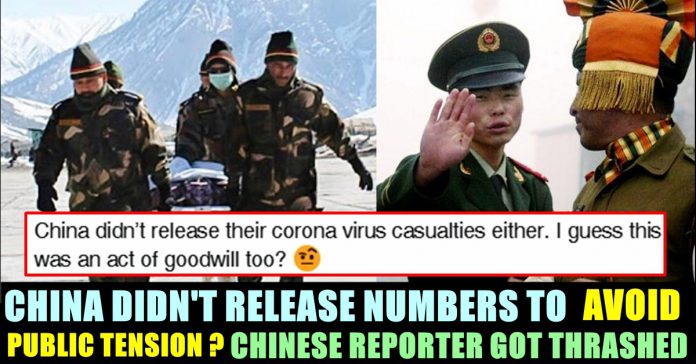 Entire country is in utter shock and anger due to the border tension that took place between India and China army. People of the country has reacted with shock and caution to the worst loss of life on its border with China in 60 years, with senior leaders largely silent on the hand-to-hand clash in remote, inhospitable Himalayan territory in which at least 20 soldiers died.

A day after the reports on the first killings in the disputed area emerged, Indian news outlets began naming some of the dead soldiers. The killings were sparkled when a patrol of Indian soldiers unexpectedly encountered chinese troops in a steep section of the mountainous region they believed the people’s liberation army had retreated from, in line with a 6 June disengagement agreement, said sources.

The two armies jostled and a hand-to-hand fighting broke out -neither side armed in line with decades of tradition supposed to ward off the possibility of escalation between the nuclear-armed neighbours. Then an Indian commanding officer was pushed, fell from the narrow ridge and plunged to his death in the gorge below.

The united nations and US government have expressed concern over the outbreak of violence between Indian and Chinese soldiers on the disputed Himalayan border which saw at least 20 people killed. Both countries[ militaries blamed the other for the conflict.

Meanwhile, a chinese reporter named as Hu Xijin, posted a tweet saying that Chinese didn’t release number of PLA casualties in clash with Indian soldiers as they doesn’t want the people of the two countries to compare the casualties number to avoid stoking public mood.

Chinese side didn’t release number of PLA casualties in clash with Indian soldiers. My understanding is the Chinese side doesn’t want people of the two countries to compare the casualties number so to avoid stoking public mood. This is goodwill from Beijing.

This tweet received enormous number of contradictory reactions from the Twitter users of India. “The whole world has seen chinese goodwill when u have faked the data about the #ChineseVirus. So thanks but no thanks!!!” said one of a user through his comment and another one wrote ” China didn’t release their corona virus casualties either. I guess this was an act of goodwill too?” asked another user.

Being an aggressor, violating borders of others & taking lives must be mentioned as 'goodwill' in some chinese manual. Our soldiers will beat the shit out of u before u can even begin counting your casualties. Anyway, much like Pakistan, you also dump your k!lled soldiers..

The whole world has seen chinese goodwill when u hv faked the data about the #ChineseVirus. So thanks but no thanks!!!

China didn’t release their corona virus casualties either. I guess this was an act of goodwill too? 🤨

China was neither true in its figures on Wuhan nor is true on casualties in Beijing. Neither will it be true in its figures in Galvan. Your releasing or not will make no difference. The fact is that the Chinese myth has broken. Future clashes will be worse. Expect it

Aah just like the wuhan virus numbers. Why don't you just accept that they were too many to count?

u didnt release it bcoz ur casualities r too high