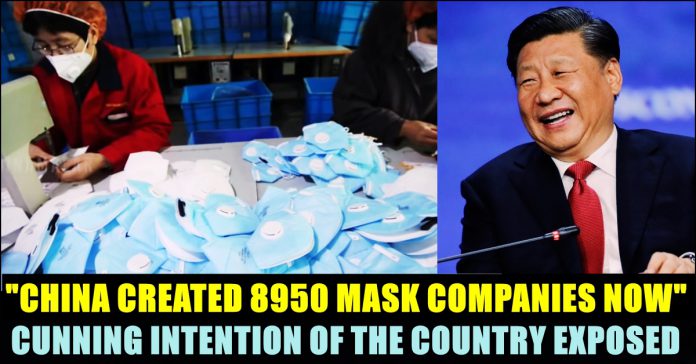 For past one month, the impact of COVID 19 is huge in country India. As we all know, the birthplace of the virus which killed more than 43,000 people across the world, is China. Now, as every part of the world is suffering in big time due to the virus, China is slowly recovering from it. Official statistics out of China suggest it is bouncing back from the Coronavirus outbreak that shuttered the country for much of the first quarter.

China said manufacturing activity returned to expansion in March, with its official metric raising to 52.0. Now, a recent report of Dinamalar, has suggested that China’s cunning method to defeat the economic growth of the world countries has revealed. “China started to gain profit after exporting COVID 19 to the world countries” they said in their report.

China restricted other country people to enter their border in order to avoid getting infected from the COVIN 19. “Currently the country started manufacturing face masks, hand gloves and ventilators and involved in bargaining with the countries which got affected by the deadly virus.” the report said. In 1999, a book on military strategy named as “Unrestricted warfare” was written by two colonels in the People’s Liberation Army, Qiao Liang. The book concentrates on how a nation such as China can defeat a technologically superior opponent such as the United States through a variety of means. “Defeating the economy of United states is the only way to defeat such nation” is what the book feeds to its readers.

China using that method after 20 long years to defeat the world countries. While the entire world is under lockdown, China’s tourist places and malls are very much active. People of the country returned to normalcy. Their factories are also started operating. China invested 344 billion dollars to recover the economical state of the nation.

The total number of people who got affected due to Corona in China are 81,000 whereas America and Italy faced more than 1 lakh positive cases of Coronavirus. It is notable that China is the most populated country in the world. The most shocking fact is, that more than 8,000 face mask manufacturing factories emerged in China during mid february which evidently proves that China concentrated on gaining profit through the demand faced by the countries across the world.

Apart from these, China is also signing agreements on selling precautionary tools such as hand gloves, sanitizers to the world countries. The report also suggests that China is intended to invest on the companies which are suffering due to this outbreak. High profile manufacturing companies such as BMW, Tesla, FIAT, Foxconn which are located in China started operating from February itself with the help of China, report says.

Many TV shows, movies which released years before are also suggesting that China intentionally spread the virus to defeat the world countries. Now, these gestures of the China government is also suggesting the same. Comment your views on these cunning moves made by the Chinese !!