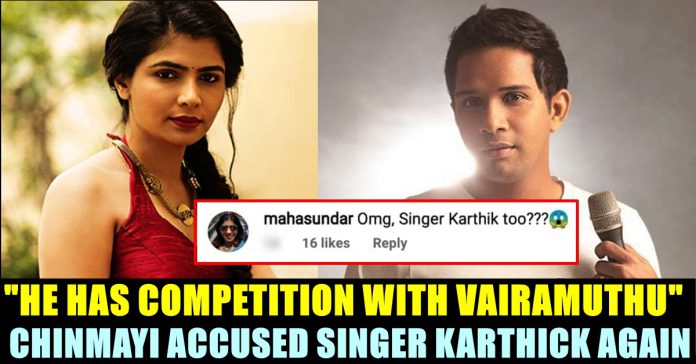 Former Hollywood movie producer Harvey Weinstein accused for committing sexual criminals such as rape by using his influential position. In October 2017, following sexual abuse allegations, Weinstein was dismissed from his company and expelled from the Academy of Motion Picture Arts and Sciences. More than 90 women had made allegations against Weinstein by October 31. Weinstein was arrested in New York and charged with rape on May 25, 2018.

On February 24, 2020, he was found guilty of two of five felonies in New York, charges which carry a sentence of up to 25 years. Popular Singer and Voice artist who is also known as one of the leading representative of #MeToo movement in South India has shared the news and said that it could take 13 women against Lyricist Vairamuthu whom she accused as a molester, two years back.

“It could take 13 women so far against Vairamuthu Scores of people banned by Mr Radha Ravi Multiple girls naming Mr Anu Malik, Kailash Kher or Singer Karthik or Raghu Dixit or Ravikiran or Sasikiran or Tambras Narayanan or O S Thyagarajan or Srimushnam Rajarao but hey … :)” she wrote as a caption in her post.

It could take 13 women so far against Vairamuthu Scores of people banned by Mr Radha Ravi Multiple girls naming Mr Anu Malik, Kailash Kher or Singer Karthik or Raghu Dixit or Ravikiran or Sasikiran or Tambras Narayanan or O S Thyagarajan or Srimushnam Rajarao but hey … 🙂

To this post, she received many kind of comments from her followers. Among them one of her follower asked Chinmayi, if Singer Karthick also involved in sexual harassment cases with a shock to which Chinmayi replied by saying “He was named by multiple women. He has a close competition with Mr Vairamuthu. :)”

Here’s the screenshot of her answer :

This reply from Chinmayi shocker many of her followers. Few of them said that Karthick is their favourite singer and expressed their emotions through emojis.

When a follower asked Chinmayi to bring them to court, the singer explained the struggles faced by women in India with the law system.

Popular singer Chinmayi Sripaada has accused Vairamuthu by alleging that she was asked to “cooperate” and visit him in a hotel. In the wake of #MeToo movement, there are plenty of other women who have accused Vairamuthu on the basis on anonymity. But singer Chinmayi chose to tweet. She has recalled an incident that a concert organiser asked her to “cooperate” and visit Vairamuthu in his hotel room. She said this happened in 2005 or 2006.

Comment your views on Chinmayi’s accusation against Singer Karthick !!