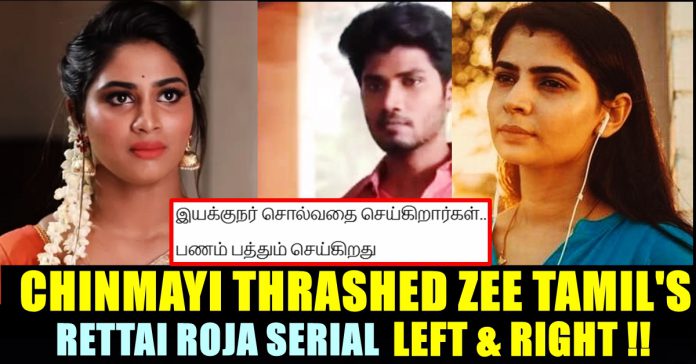 Chinmayi is known for voicing out for the girls who became victim of sexual harassment. As soon as she represented the #MeToo movement in South India by accusing lyricist Vairamuthu, she started receiving so many personal messages from girls who got affected by harassers.

The scene which shows the lead actor of it schooling a group of girls on how to wear dress and how a woman should be, irked Chinmayi. The scene also shows the protagonist saying that he wants to slap girls who wear clothes in such way.

Chinmayi on seeing the scene wrote “One monologue by a male actor on a Zee Tamil serial, Rettai Roja on how he feels like hitting the women because they are dressed the way they are. And speech on ‘how women should be’.Velangidum #kalacaram” wrote the singer in her official twitter account.

One monologue by a male actor on a Zee Tamil serial, Rettai Roja on how he feels like hitting the women because they are dressed the way they are.

And speech on ‘how women should be’.

This tweet from the singer created huge outrage as the followers of her felt that the scene has no sense at all. Check out some of the replies Chinmayi is receiving below :

😂 I guess the writer is from 1960s. Wtf did I watch? Idhu serial aah illa Vera Edhavadha? 🤔 https://t.co/9iWPafJamr

To think he is saying all this to women who have dressed in proper, official, formal dresses/blouses 😄
In which century is the dialogue-writer, if this is work ( or any) inappropriate! Wishing him civilization soon! #zeetamil @ZeeTamil https://t.co/P85E6OUDLV

99% TV serials are crappy. Sun, Vijay, Zeetamil all of it. Silently turning toxicity into all our door steps. There must be strict regulation on this. https://t.co/QrjGgfYgLl

Apart from her dubbing works and singing works, Chinmayi is highly recognised by the Tamil people for her existence in social media. Her recent notable film as a voice artist was “96” in which she lent her voice for actress Trisha. Being a representative of South India for Me Too movement, Chinmayi is one of the very active celebrities who interacts with her followers often.