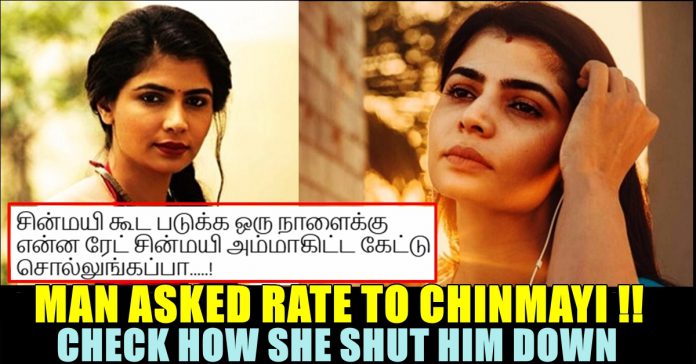 A statement from Chinmayi’s mother grabbed the attention of netizens. According to Indiaglitz, T.Padmhasini, mother of singer Chinmayi, in a recent interview made statements in a way of supporting Devadasi system. Devadasi system is a religious practice whereby parents marry a daughter to a deity or a temple. The marriage usually occurs before the girl reaches puberty. In recent decades, the practice has been used to push young girls into prostitution.

Chinmayi’s mother said that it is a great system that belongs to the nation and added that she will never forgive Periyar for destroying the system. This made many netizens to troll her and the negativity affected Chinmayi as well. Chinmayi, in way of putting a full stop to the trolls and negativities, posted a tweet saying that she is not responsible for her mother’s activities. She even asked apology for hurting sentiments. Check out her tweet below :

However, as we all know Social media don’t know the value of the emotions expressed by an individual. Many high profile celebrities getting trolled and abused by random social media users in daily basis. In a way of hurting the emotions of Chinmayi, an user made an obscene comment in a tweet of the singer.

This tweet from the singer received major support from her followers. Many of them termed it as “Slipper shot” and “Brave reply”. She further replied to few more abusers and trollers which is evident through her twitter timeline.

Chinmayi is known for voicing out for the girls who became victim of sexual harassment. As soon as she represented the #MeToo movement in South India by accusing lyricist Vairamuthu, she started receiving so many personal messages from girls who got affected by harassers. What do you think on these replies from the MeToo activist ?? Comment your views below !!