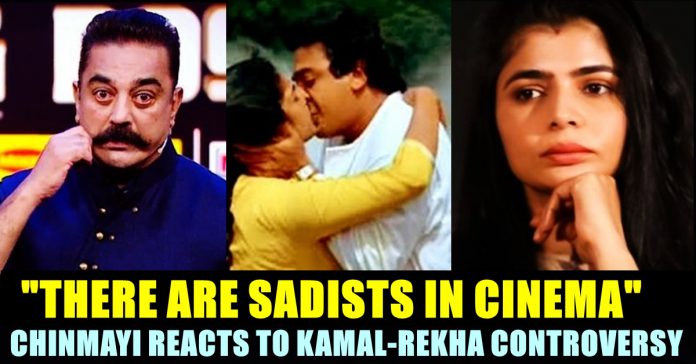 The revelation of Rekha about her experience in the shooting spot of Punnagai Mannan has created furore. The actress has been saying that she got kissed forcefully for several years since the shooting took place. Now, as the actress shared about it one more time, in an interaction with Cinema Vikatan nine months ago, reactions are pouring from all over the internet.

Media portals started interviewing the actress as the particular clip went viral in the micro blogging social media site. Rekha who is not expecting an apology from anyone, says that she still stands with her statement. “I was so small at that time as I just finished my 10th standard at that time. I don’t know a thing about Cinema at all at that time. During the making of that scene at the falls, Balachander sir asked me to close my eyes as I was about to die, according to the scene” Rekha said in her interaction with Cinema Vikatan.

“Then he (Balachander) asked Kamal whether he remembers what he said. All of a sudden Kamal kissed me and we jumped. Then I said that my father won’t accept such things to them. They even convinced me that it will not look dirty on screen. I even told my mother that they kissed me without my permission. I gave several interviews regarding the same incident. Kamal and Balachander may still have a disappointment with me. But I have to tell the truth, right” she said.

Now South India’s #MeToo movement activist Chinmayi has reacted to the revelation of Rekha. She said that such incidents of forcing artists to do something is still happening in film industry. She revealed that there are sadists in film industry who likes to beat people on set. “Their stories aren’t spoken or heard. It has all been normalized and the abuse continues” she wrote in her series of tweets. Chinmayi further said that Rekha had to normalise the incident that she faced when she was 16 year old.

Check out her tweets here :

There are downright sadists who like physically assaulting, beating people on set. It is a power game. And these are grown men on sets working in various capacities that will be assaulted. Their stories aren’t spoken or heard. It has all been normalized and the abuse continues

Rekha maam spoke about the whole episode in a matter of fact manner, even included some laughs so thag she isnt attacked; and her interviewer laughed as well. That’s the extent of normalisation women have had to go into.

When one of her followed said that Rekha just talked about the incident as anecdote, Chinmayi said “Yes. It was only an anecdote. We have had enough directors proudly talk about how they slapped female actors to perform. So much that a woman’s face became swollen. That was normal.”

Yes. It was only an anecdote. We have had enough directors proudly talk about how they slapped female actors to perform. So much that a woman’s face became swollen. That was normal. https://t.co/J4bZnqkZhK