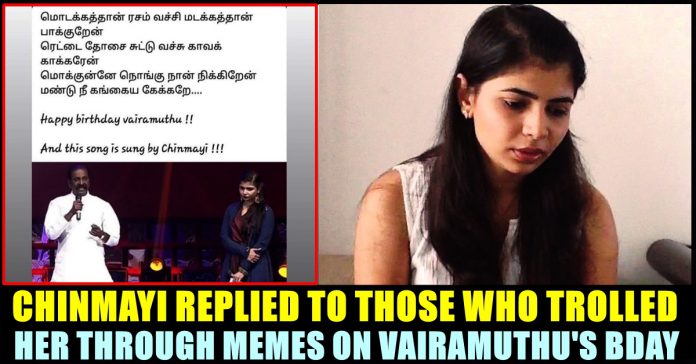 Singer cum Met Too activist Chinmayi replied to the online users who made fun of her and trolled her on the birthday of lyricist Vairamuthu whom she accused of sexually harassing her during the early stage of her singing career. Ever since accusing him of molestation through “MeToo” movement, the singer has been facing severe trolls, criticism and questions on why she didn’t expose him earlier. Now, on the 68th birthday of the lyricist, many came up with posts tagging Chinmayi to fun of her. Capturing the screen shots, the ace singer exposed them and uploaded a story in her Instagram account to reply them.

A user uploaded a picture of Chinmayi and Vairamuthu sharing stage together and wrote the lyrics of “sara sara saara kaathu” song, lyrics of which was written by Vairamuthu and sung by Chinmayi, to wish Vairamuthu on his birthday. Sharing the screen shot of his post, the singer wrote “Every year. Without fail. I mean 13 July is also my mothers birthday and thanks to this molester and his enabling lot – I
remain silent. But some of these guys are absolute garbage. I saw some tweets from the usual accounts which call themselves a certain stock. These particular guys cannot be Dravidian stock. They are the molester stock. They need to change their Twitter Banners and change their Thalaivar to their actual hero The Molester Poet of Tamilnadu.”

Further, she came up with a screen shot in which we could see a twitter user tagging Chinmayi and asking her to wish her “partner” Vairamuthu on his birthday. On seeing the user’s bio saying that he belongs to the Dravidian stock, Chinmayi exposed him as an example to her followers and said that the term he used as “Unga aalu” was used in the context of partner.

In her next story, Chinmayi conveyed a message to those who tagged her on the birthday of Vairamuthu. “If you want to praise your poet Vairamuthu, do it. You people are partners. There will be so many dealings between you people. If you drag my my name while wishing, it is not going to bother me in any way” Chinmayi said in her post.

“Don’t think that I will shed tears and dip in depression on seeing your posts and memes. It’s boring. It’s your fate to accept him and live. I got myself relieved long ago. I don’t have to be dependent on you but he has to. The memes and posts you upload shows how low you people stooped. You expose yourself celebrating a sexual offender. Thanks for blatantly showing the culture of our country. It will be useful for me in the future. It will be fair for you if you people get paid for what you do” the singer said through her story.

Here’s the screen shot it :