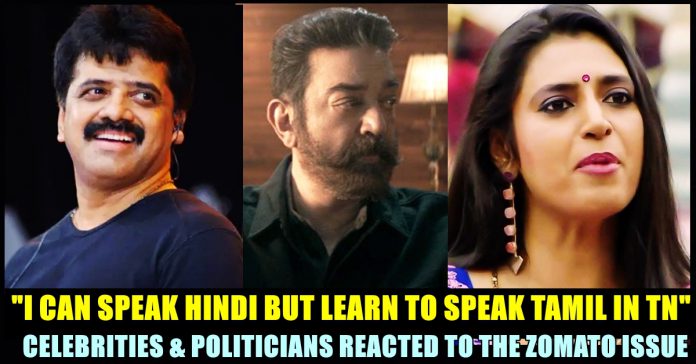 Along with the public, a number of cinema celebrities, politicians and journalists has reacted to the Zomato issue that took place on Tuesday. From MP Su Venkatesan to cinema actress Kasthuri Shankar, many known personalities reacted to the news by uploading to tweets in their respective social media handles. A tweet uploaded by Singer Srinivas, condemning Zomato blew up in the micro blogging social media site as well.

Ordered food in zomato and an item was missed. Customer care says amount can’t be refunded as I didn’t know Hindi. Also takes lesson that being an Indian I should know Hindi. Tagged me a liar as he didn’t know Tamil. @zomato not the way you talk to a customer. @zomatocare pic.twitter.com/gJ04DNKM7w

It all started when a customer named Vikas tried to get his refund after finding an item missing in the order he made. A call centre agent cited language barrier as an issue and made a personal opinion on why everyone in India should learn Hindi language, a “little” bit. Agitated Vikas captured the screen shot of his chat and uploaded it in his twitter handle which blew up across the country. It led to a twitter trending of hashtag “Reject Zomato”.

Vanakkam Vikash, we apologise for our customer care agent’s behaviour. Here’s our official statement on this incident. We hope you give us a chance to serve you better next time.

And remember, our call centre agents are young people, who are at the start of their learning curves and careers. They are not experts on languages and regional sentiments. Nor am I, btw.

Actor Kamal Haasan, in his tweet, said that central government should intervene and make things clear about Hindi not being our national language as many believing it as a fact. Check out his tweet below :

Singer Srinivas said “I love Hindi songs I can speak Hindi but Hindi is Not our Only National language.If you live or work in Tamil Nadu,you need to know Tamil.. English is ok since it is the Lingua Franca for the world. There’s no such thing for the nation, though. Learn to speak Tamil in TN. Hindi is not our Only official language .. we have 22 official languages like Tamil, Malayalam, Telugu and Kannada” through his tweet.

“The customer is always right..in whichever language he prefers. If you want my business, ask in my language. It’s that simple ! @deepigoyal, you can give sermons on Hindi and tolerance after addressing the ignorance and arrogance at zomato . Top down” actress Kasthuri said in her tweet.

The customer is always right..in whichever language he prefers.
If you want my business, ask in my language. It’s that simple ! @deepigoyal , you can give sermons on Hindi and tolerance after addressing the ignorance and arrogance at zomato . Top down.

Here’s how MP Su Venkatesan and MLA Durai Chandrasekharan reacted to the issue.

Advising tolerance to customers is not in good taste and seems to be against the spirit of official apology on the issue. You have to learn the history of Tamilnadu. Issue is not a question of tolerance but a fighting spirit against imposition of Hindi. @deepigoyal #Zomato pic.twitter.com/2kTlN1s98N

Before we bring in legislation to reserve jobs for locals in TN, we need to enforce local hires for front desk/ customer care on priority before others start lecturing us on tolerance, patriotism, culture etc.

How difficult it is to take responsibility, apologize and move on? https://t.co/dQAMwArRPr

Journalist Niranjan Kumar has been tweeting about how flawed Zomato is as a company, ever since the issue took place.

And Mr.Goyal as per the report of july 2021 your company is facing an indirect tax matter with Directorate General of GST Intelligence, Mumbai Zonal Unit

So show some tolerance to Country.Thanks https://t.co/3Yhe3oFZlk