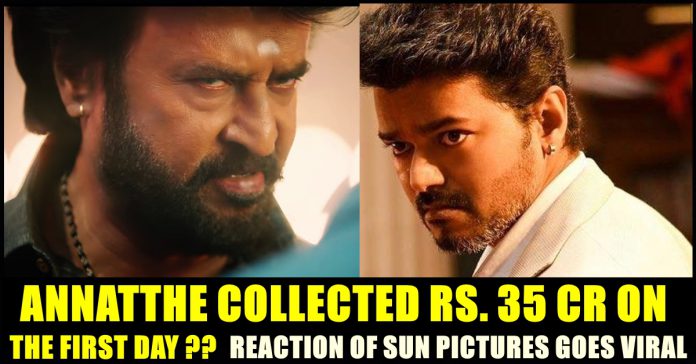 Fans of actor Rajinikanth and Vijay are actively involved in verbal spat in social media platforms over which star holding the record of collecting highest amount on the first day of their movie’s release. With fans of actor Vijay claiming that “Sarkar” of their favourite star collected the highest amount in state Tamil nadu of all time, Rajinikanth fans countering them saying that “Annatthe” broke the record set by “Sarkar” effortlessly.

“Annatthe” released on theatres across the world on the special occasion of “Diwali” festival with much expectations. Fans of the actor who didn’t get satisfied with his previous film “Darbar” were eagerly waiting for the film to get released. Despite of the mixed reviews, the film is running successfully with houseful shows. Due to the high expectation level and the 100 % occupancy Tamil nadu government allowed, the Super star-starrer garnered humongous amount of foot fall in the theatres across the state.

Now, as soon as the end of the first day, fans of actor Vijay started trending “Unbeatable Sarkar opening” hashtag to make a point on Annaththe couldn’t beat the record of the Vijay-starrer. The A.R Murugadoss directorial released during the Deepavali festival of 2018. The film reportedly collected Rs. 31.78 crore on the first day of its release and became the film that collected the highest amount in state Tamil nadu in the history of Tamil cinema.

Check out some of their tweets below :

Still #Sarkar holds the Top Grosser in Day 1 ( 32 Crores ). It's already evident that Thalapathy Vijay era has begun long back and he is ruling everywhere👑#UnbeatableSARKAROpening@actorvijay + @ARMurugadoss combo = 🔥#Beast #Master pic.twitter.com/JcOQVC19DO

Here is the List of BO Collection of #SARKAR On Day one TN Alone
~@Cinetrak #Beast #Master @actorvijay#UnbeatableSARKAROpening pic.twitter.com/AF3CzSM5ks

On the other hand, fans of Super star Rajinikanth are tweeting that “Annatthe” collected Rs. 34 + crore on the first day and defeated the record set by “Sarkar”. A tweet uploaded by movie tracker Manobala Vijayan on “Annatthe” collecting Rs. 34 crore got recognized by the official twitter handle of Sun pictures as well.

Here’s some of the tweets uploaded by the fans of Superstar Rajinikanth :

It's an all time record Day 1.

He was the King
He is the King
He will remain forever the King #Annaatthe #Rajinikanth pic.twitter.com/9kpRlJaJ5G

This is the same production house which has produced #sarkar and going to produce #Beast.#Thalaivar proving last 40 years at box office that he is emperor pic.twitter.com/GAtssQ2Ogb

Here’s the screen shot of Sun pictures retweeting the tweet of Manobala Vijayan :

Comment your views on this tweet war that is taking place between Rajini fans and Vijay fans !!