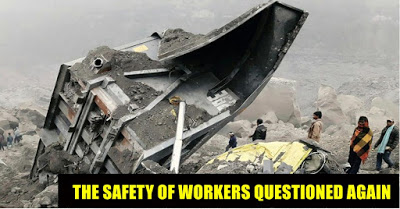 At least nine workers have died and nearly two dozen are feared trapped in a coal mine which has collapsed in the eastern Indian state of Jharkhand.


A heap of mud caved in at the entry point of the Latmatia mines of Eastern Coalfields Limited (ECL) in Godda district, police said. The collapse occurred at 8:30pm yesterday, the state disaster management department said.

“So far, nine bodies have been recovered,” RR Amitabh, a general manager at the ECL project office told Reuters.

While initial reports put the number of trapped at around 10, a CISF official told ANI that around 40-50 workers are suspected to be trapped inside the debris along with 40 vehicles of a private company operating at the site.

Heavy machinery was deployed as rescuers, including those from the NDRF, toiled through the day extricating bodies and looking for survivors.

“Unfortunately the casualties have increased from seven in the morning to 10,” the coal ministry said in a statement.