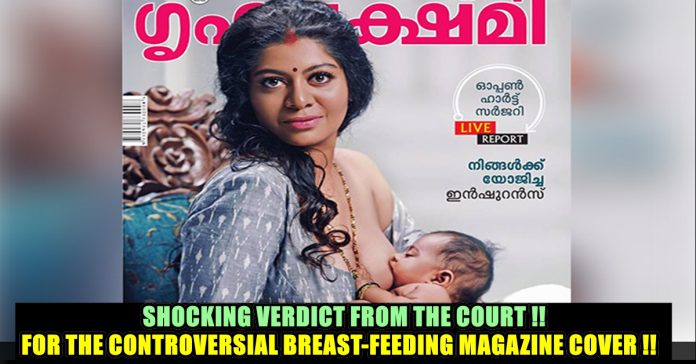 In what has come as a relief for Malayalam magazine Grihalakshmi, the Kerala High Court has recently refused to categorise its cover of a woman breastfeeding a baby as obscene.

The court noted that “shocking one’s morals” is an “elusive concept”, and that “one man’s vulgarity is another man’s lyric”.

Legal affairs site Livelaw.in reports that the first bench comprising then Chief Justice Antony Dominic and Justice Dama Seshadri Naidu observed, “We do not see, despite our best efforts, obscenity in the picture, nor do we find anything objectionable in the caption, for men. We looked at the picture with the same eyes we look at the paintings of artists like Raja Ravi Varma. As the beauty lie in the beholder’s eye, so does obscenity perhaps.” They also observed that even the sections charged by the petitioner Felix, fail to convince them that the magazine committed any offence that affected the “society’s moral fabric”.

Dismissing the petition, the High Court ruled, “Going by the contemporary community standards and without troubling ourselves with patent offensiveness—we may observe that, given the picture’s particular posture and its background setting (mother feeding the baby), as depicted in the magazine, it is not prurient or obscene; nor even suggestive of it. We, therefore, dismiss the writ petition.” According to reports by the Livelaw.in, the petitioner, Felix MA had contended that the magazine cover violated provisions of the Protection of Children from Sexual Offences Act and Rules, as well as Section 45 of the Juvenile Justice Act. He had also alleged violation of provisions of the Indecent Representation of Women (prohibition) Act, 1986 and Article 39(e) and (f) of the constitution of India.

The March 2018 issue of Grihalakshmi magazine cover carried an image of a woman breastfeeding a baby for a campaign for open breastfeeding. This sparked an outrage leading to a case being filed at the Court of Judicial Magistrate in Kollam by advocate Vinod Mathew against the publishers and the model Gilu Joseph, who was on the cover.

Another advocate, Jiyas Jamal from Aluva, lodged a complaint with the State Child Rights Commission against Gilu, the publishers of Grihalakshmi and the parents of the baby who was featured.

“The March 2018 issue of Mathrubhumi Grihalakshmi, in its cover, uses a newborn baby to create a picture of a breastfeeding mother. An unmarried Jilu Joseph, who is an advertisement model, has posed as the mother who is breastfeeding the baby in the cover photo of the magazine. The model’s breast which is bereft of milk is stuffed into the child’s mouth and this is how the photo is captured. In this manner, the baby’s health and rights have been exploited. Using the child for commercial purposes is indeed a grave issue. Such incidents which attempt to commercialise motherhood and breastfeeding put the rights of newborn babies in danger. The cover, which tricked the baby into thinking that it the model is its mother and that it will get milk is an embarrassment to our society as a whole,” the complaint read.