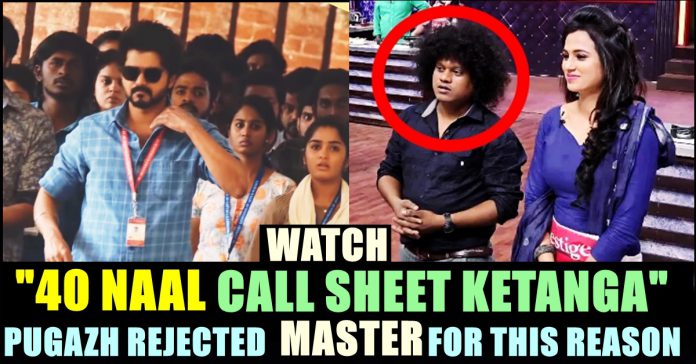 The recent sensation Pugazh who rose to fame through Vijay Television’s “Cook-u with Comali” show has revealed why he denied to accept the opportunity offered by the “Master” team to act in the Vijay-starrer. The reality game show demands a cook to join hands with a comedian to make delicious food items in order to impress the judges of the show. It impressed the TV audience in big time as soon as the episodes started streaming every week. Not only family audience, even youngsters started celebrating the show as the show mainly concentrated in humour unlike other cookery shows.

Pugazh who initially grabbed the attention of the audience through his quirky look, made them to celebrate him with his timely counters and mischievous behaviour in the episodes of the show which has chef Dhamu and Venkatesh Bhat as judges. As we all know Many prominent actors of Kollywood cinema hailed from Vijay Television. Starting from Comedy actor turned protagonist Santhanam to one of the highest paid Kollywood star Sivakarthikeyan, number of people who worked in Vijay TV excelled in Tamil film industry. Ma Ka Pa Anand, Rio Raj, Priya Bhavani Shankar, Comedy actor Jagan are few others who were worked in the channel before making their debut in Tamil cinema.

Now Pugazh who is gaining fame through Vijay Tv’s “Cook-u with Comali” has revealed that he got the opportunity to act in Lokesh Kanagaraj’s “Master” but turned down due to a particular reason. He appeared in an interaction with Cinema Vikatan, in which he revealed that he has acted in Kaidhi as well.

On getting a chance to act in “Master”, Pugazh said that the makers of the movie, required 40 days of call sheet from him. On turning down the opportunity Pugazh said “It is my dream to act with Thalapathy and to act in the directorial of Lokesh Anna. After finishing the 2 episodes of “Cook with Comali” I got a call from the manager of “Master”. He asked me 40 days of call sheet and he asked me to cut my hair for the shoot. What if an assistant director of Master who couldn’t identify me as Pugazh sends me to the last row among the 40 members ?” asked Pugazh who already worked as junior artist.

Watch the video below from 15th minute :

“Apart from that, I started reading the comments for the show “Cooku with Comali” where people praised me highly. When I approached Ma Ka Pa Aanand for suggestion, he also said that there is big talk doing rounds outside abou me. Even If I acted in Master, I couldn’t have managed get this much of reach that I got from ‘Cooku with Comali'” said Pugazh. “While reading those comments, I get this energy to give more entertainment” he added.