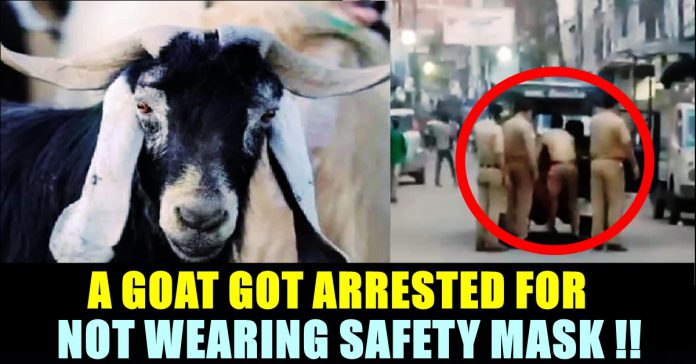 A police officer who said that the Goats should wear safety masks as animals like dogs are wearing, changed his statement after it became a subject to severe online trolls. In Uttar Pradesh’s Kanpur city, A Goat was kept in Police custody for not wearing safety mask and the video of a bunch of police officers forcing it to get into a police jeep is going viral in social media platforms with hilarious captions.

The incident took place in the Becongang area of the city where the Police had found the animal without a mask and they took it with them in their jeep. However, it got back to its owner after he rushed to the police station after knowing about the incident. Reports says that the owner pleaded to the authorities for the release of his goat.

Cops released that goat on one condition that it should not be seen on the road without a mask, according to Times now news. Due to the emergence of COVID 19, people were ordered to maintain social distancing and to wear a safety mask as primary precautions to avoid getting infected.

“People are now making their dogs wear a mask, so why not a goat”, Saifuddin Beg, circle inspector of the Anwarganj police station told IANS. However, as soon as the news caused a meme marathon in Internet, the police changed it narrative. They said that they wanted to arrest the owner who was not wearing a mask. “As he got escaped from the spot by leaving his goat there, We took his goat to the custody” their latest media statement said.

Check out some of the reactions regarding this report below :

After a goat arrested for not wearing mask in Uttar Pradesh. #goatarrested #uttarpradesh #GOAT

#police in #UP arrested a #goat for not wearing a #mask

When #law can’t apprehend actual #criminals because they are sitting on #political thrones in the state, I suppose a #scapegoat is what does the job. #india #advancing

Comment your views on this bizarre arrest of UP police !!