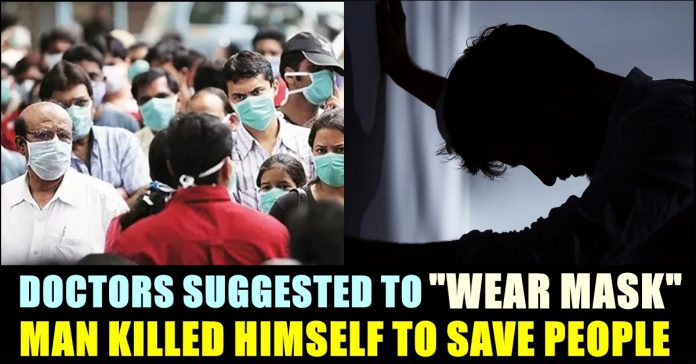 A man named as Balakrishnayya from Chittoor district in Andhra Pradesh killed himself after suspecting that he had Coronavirus. He did by believing that he is going to prevent the disease from spreading from him to his children and to his villagers. This tragedy created huge furore in the region and people are expressing their emotions in various ways on hearing this news.

The threat made by Coronavirus across the world looks extremely dangerous. The disease started infecting in China and caused several deaths. Now it has been reported that the disease started spreading in India which resulted in three persons in Kerala getting hospitalized few days ago. The lethal disease has killed more than 1100 people in China and has spread to over 20 countries across the world.

The 54 year old Balakrishnayya visited Ruia Government General Hospital on Monday for medical consultation. The family members of the deceased informed media that the miscommunication with his doctors led him to believe that he suffers from Coronavirus and to take the decision of killing himself to prevent it from spreading to others.

The doctors allegedly asked Balakrishnayya to wear masks which made him to believe firmly that he has Coronavirus. “He went to hospital for a check up regarding his heart ailment. The doctors suggested him to wear mask. He misunderstood their advice and thought that he was infected with coronavirus.” said Balakrishnayya’s son to the media.

The son further said “He wouldn’t let any of us come near him. I told him you don’t have infection but he wouldn’t listen. May be, if he got proper counselling, he would have listened. He saw lots of videos (on internet) about symptoms and concluded that he had all those symptoms. He locked us up in the house on Monday and before we could get help to stop him, he hanged himself on a tree,”

Balarkrishnayya’s wife told to media that her husband panicked immensely and acted strangely at one point by imagining that he is a threat to the family and the village. According to his wife, Balakrishnayya pelted stones at people who tried to go near him. Before killing himself, Balakrishnayya told to his wife that he needs to end his life immediately. “He locked himself in and didn’t allow us to go near him” said his wife.

No cases of coronavirus have been reported in Andhra Pradesh though it was declared as global health emergency after it started spreading in more than 20 countries. The common symptoms of Coronavirus infection are fever, cough and breathing difficulties. The severe state of the disease causes pneumonia, severe acute respiratory syndrome, kidney failure and even death.