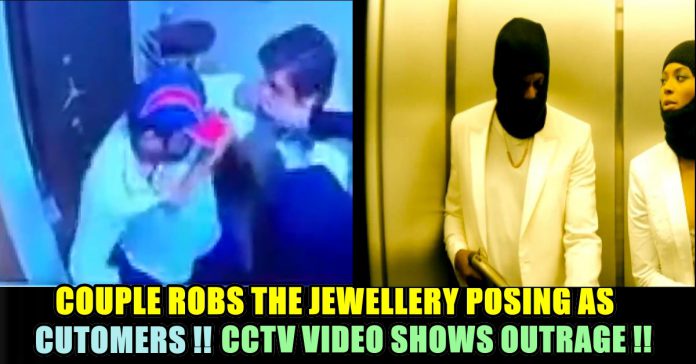 A couple robbed about 0ne kg gold and Rs 4.5 lakh cash from Jai Bhavani jewellery shop at Beeramguda in Ameenpur of Sangareddy district on Tuesday. Based on the CCTV footage, the Sangareddy police has formed five teams to nab the accused.

The CCTV footage revealed that the couple used a pistol to threaten the shop owner, Jayaram. They even sprinkled chilli powder on Jayaram’s face. During the scuffle, Jayaram managed to pull the pistol from the accused and injured the latter on his head, said the Ameenpur police. The accused entered the jewellery shop at around 8.15 pm when Jayaram was alone. Posing as customers, they passed time in checking the gold ornaments.  At around 10 pm when Jayaram went inside the storeroom telling the customers that he wanted to close the store for the day, the male suspect followed Jayaram to the storeroom and threw chilli powder on his face. Jayaram was pushed on the ground and was beaten up. Meanwhile, the male suspect pulled out a country-made pistol and hit Jayaram on his head leading to severe head injury and the latter also managed to overpower the suspect and injure him with the same weapon.

Making sure that Jayaram will not come out of the room, the duo opened the chest and decamped with Rs 4.5 lakh cash and several gold ornaments weighing about one kg.

Jayaram managed to alert the passersby by raising hue and cry and then alerted the Ameenpur police. He also told police that the couple had visited his shop several times in the last six months and purchased some gold and silver articles.

The police immediately rushed to the spot and collected the clues, including the CCTV footage.

Ameenpur inspector Mr Ram Reddy said, “The suspects have spent about two hours in the shop. Five special teams have been formed to nab the accused.” Sangareddy SP Mr Chandra Shekar Reddy said “The victim has told that the male suspect has visited his shop about six months ago and purchased some gold articles. We are making efforts to identify the suspects as we got CCTV footage and the counterparts have also been alerted.”