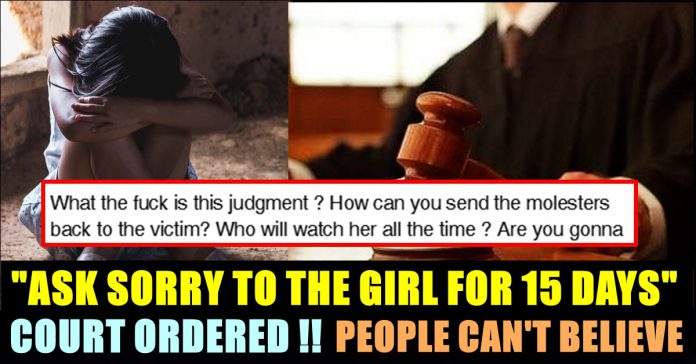 A judgement in Bihar court in a molestation case created a huge outrage in social media. Three accused abducted a 15 year old girl in an intention to molest her in Bihar’s Kamtaul area. Hasmat Khan, Mohammad Afzal and Mohammad Akthar were identified as the criminals and they were taken into police custody as soon as the child raised alarm. It was reported that the passerby who were known to the victim rescued her. The incident was happened in a secluded area on November 17.

A case was registered against the molesters under relevant sections under IPC and POCSO act. However, A Darbhanga Additional and Sessions Court has granted bail to three accused. The court directed the accused to apologise to the minor for 15 consecutive days. Special Judge Sanjay Agrawal ordered the accused should be released on a provisional bail till December 17. And they will also have to furnish a bail bond of Rs 10,000 each with two sureties of the like amount.

As per the report, the court has ordered the accused to report at the school when it starts and the school’s principal will ensure a report is sent in this regard to the court. This bizarre judgement confused the netizens who are questioning the court for issuing such justice. They are asking why the girl should meet her molester daily and some assuming that the accused could try bullying the girl when they have the chance to meet her daily for 15 consecutive days.

Singer Chinmayi who got fed up with such strange incidents against women in India wrote “Why am I not surprised to see such a verdict from Bihar?” in her twitter account. Check out some of their reactions below :

People across the country are devastated on seeing the crimes that are taking place against women. As we all know, the number crimes against women in India is increasing day by day. The series of recent happenings of rape and murder shook the entire country and is making a very big impact in social media. As soon as the pictures of the criminals who gang raped and murdered Priyanka Reddy released, people in social media are demanding an immediate justice with severe punishment to them. This judgement in Bihar case indeed puzzled the people of the country in big time.

What do you think on this Judgement served in the molestation case ??Comment your views below !!