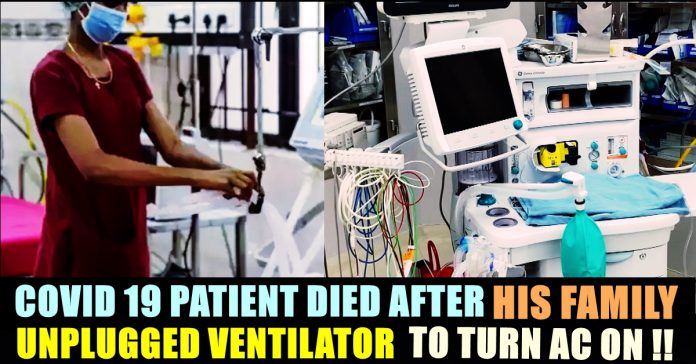 In a way of making the viral meme which said that the world is fighting not only with COVID 19 but also with stupidity true, a family killed their own family member due to ignorance and fought with the doctors for the loss. In a bizarre incident, a COVID 19 patient in Rajasthan died after his family members who visited him disconnected the ventilator to plug-in the air cooler to manage the scorching heat. The incident took place on 15th of June in Maharao Bhimsingh Hospital.

Medical Superintendent told media that a committee was formed soon after the death was reported. The committee is required to submit its report on Friday at 4 PM. “We have set up the committee to investigate the incident based on the primary information. The committee includes deputy superintendent of the hospital, nursing superintendent and CMO. We will look into the matter and then shall explore further action for a need to go to the police.” he said to the media.

When the family members visited the MBS hospital to meet the COVID 19 patient, they unplugged the ventilator and had put on the cooler switch which they had allegedly bought from outside. The ventilator worked for some time on the battery but later it collapsed and the patient turned critical, according to reports.

The doctors who were reported of the patient’s critical condition, rushed to the ward and tried their best to save the patient’s life but failed as the patient didn’t respond to the treatment. Unaware of their ignorance, the family members who caused the death, attacked the resident doctors in anger.

Doctor Varun, on duty, submitted a written complaint to the officials, alleging that the family members of the patient misbehaved with the staff. Other resident doctors supported Varun and stopped working very briefly and resumed later.

This news doing rounds in social media platforms with various kind of reactions. Many people believing that this news could be a fake one as people would not be allowed inside COVID 19 ward.

That’s both funny and sad at the same time 😶

I thought this was supposed to be a joke 🙁 really appalled by the stupidity of these people.

This can’t be true. Are Indians so stupid that we would do something like this? This has got to be a parody.

In India, so far, three lakh eighty one thousand confirmed cases have been reported. 12,573 people have been died due to the virus which killed more than 4 lakh people world wide.