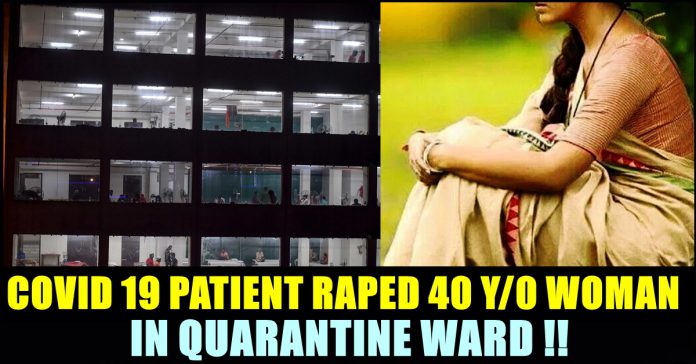 As the entire world is struggling to combat the global pandemic caused by the COVID 19 virus through maintaining social distancing, a shocking crime of COVID 19 positive patient raping a woman took place in a quarantine center located in Navi Mumbai on Thursday night which is on July 16. A legal case has been registered at Panvel Taluka police and the accused was immediately arrested. He also got tested positive for COVID 19, according to reports.

By using the advantage of his intimacy with the woman, the 25 year old man visited the woman last evening and raped her. After the result came, it has been identified that the victim has been tested negative and the accused tested positive. “The accused got arrested and he just tested positive today. we are keeping him under guard” said Navi Mumbai police commissioner Sanjay Kumar.

Earlier, a minor girl was rescued from the Barh railway station was allegedly raped inside the COVID 19 isolation ward of the Patna medical college and Hospital by a private security guard. The incident took place on 8th of July, the day she was brought to the PMCH isolation ward. But the incident came to light only on wednesday after the child narrated the trauma she went through to a child helpline staffer. The accused was identified as Mahesh kumar (40), a retired Army man who was working with a private security guard agency and posted at the PMCH for duty. He got arrested by the police.

During April Month National Commission of Women reported against a doctor who raped a woman at COVID 19 isolation ward. A 25 year old girl allegedly raped by a healthcare worker for two days in corona isolation ward in Bihar, the report said. The woman got admitted in an isolation ward at Anugrah Narain Magadh Medical college and Hospital. Her family members has accused a health care worker for raping the woman for two days. After being discharged from hospital, she died due to excessive bleeding at home. This incident has created major outrage at that time.

NCW takes cognizance of the incident on a migrant woman in Bihar. She was at coronavirus isolation ward for suspect of COVID19, was sexually abused & died of excessive bleeding. Further alleged that the doctor attending her was responsible.