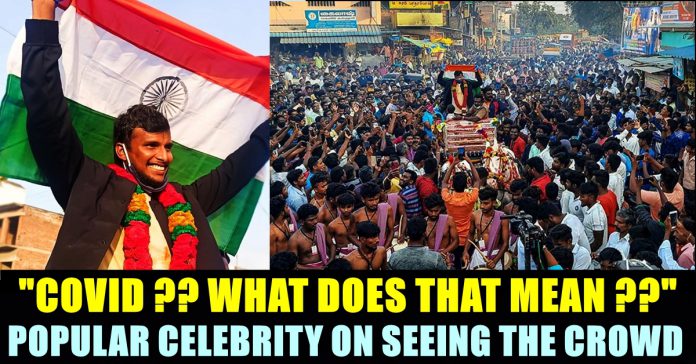 Thangarasu Natarajan received a grand welcome in his hometown Chinnappampatti after helping team India in clinching the test and Twenty 20 series against Australia in their own soil. After spending nearly half a year way from home for IPL and International matches, Natarajan returned home with a massive crowd welcoming him. Thousands of people gathered in the streets of Chinnapampatti village of Salem district to receive the left arm seamer who picked 11 wickets in the entire tour of Australia. In the IPL tournament which took place in UAE, he picked 16 wickets for his Sunrisers Hyderabad team.

It’s a hero welcome for @Natarajan_91. Well deserved celebration for our champion. pic.twitter.com/BS9SaHQDk7

The enormity of the win in Aus is yet to sink in! Look at visuals coming in from various parts of India, welcoming their local heroes & you would yearn to be a part of this folklore. Visuals of @Natarajan_91 in Salem pic.twitter.com/SUozrHoiyH

“I am elated, I can’t express my happiness in words. I never expected this kind of exception. I thank my fans, friends, relatives and villages” Natarajan said to the media. Videos of himself soaking amidst the beats of “Chenda Maalam” and sounds of “fire crackers” rocked internet on Thursday.

Natarajan who drove down from Bengaluru, stopped his car on the outskirts of his village on seeing the crowd that had gathered. His father Thangaraj, mother T Shantha and sister Thilagavathi were among the first to receive him. Former Indian opener Virender Sehwag who picked Natarajan in the Kings 11 Punjab team, posted a tweet in his social media accounts, writing “This is India. Here cricket is not just a game. It is so much more. Natarajan getting a grand welcome upon his arrival at his Chinnappampatti village in Salem district. What an incredible story.”

Swagat nahi karoge ?
This is India. Here cricket is not just a game. It is so much more. Natarajan getting a grand welcome upon his arrival at his Chinnappampatti village in Salem district. What an incredible story.#Cricket pic.twitter.com/hjZ7kReCub

It has been reported that nearly 5000 people gathered to welcome the 29 year old. On seeing the crows completely ignoring the COVID 19 protocols, popular playback singer Srinivas who also took part in Vijay TV’s supoer singer show as one of the judges, uploaded a tweet questioning about social distancing.

He who said that Natarajan deserves the royal welcome through his tweet, asked what does COVID mean on seeing the gathering of the thousands of people. “Natarajan gets a royal welcome .. Much deserved .. COVID ??? What does that mean” tweet of Srinivas read.

Natarajan became the first Indian player to make debut in all the three formats in a singe tour and took three crucial wickets in the first innings of the Brisbane test. He also excelled in the other two formats. The 29 year old from Salem, made his place into the international side after proving himself in the IPL tournament.