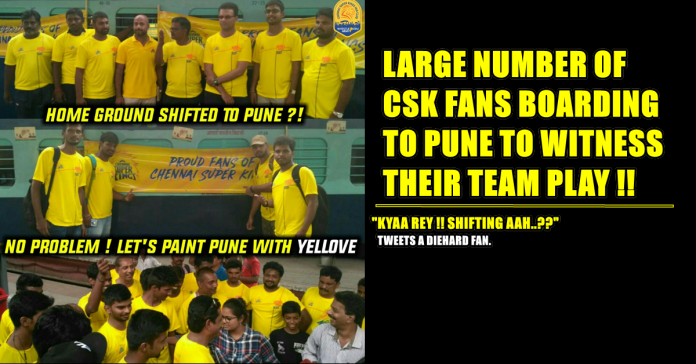 The fans painted the Central station yellow as they were wearing yellow t-shirts of CSK and raised slogans in praise of the team led by Mahendra Singh Dhoni. Banners carrying the message ‘Proud fans of Chennai Super Kings’ adorned the train named CSK Express that took off from Chennai at 8.30 am.

Chennai Central station witnessed a celebration of sorts on Thursday as hundreds of cheering fans boarded the Whistle Podu Express, a fans-only special train to Pune. A sea of yellow jerseys took over platform number 2,  dancing and waving Chennai Super Kings banners and whistling their way to the train. The special train was organised by the CSK management board to cheer up their fans who were dejected after the team decided to host its home games in Pune following the protests against the Indian Premier League during the Cauvery Management Board issue.

“After the team’s home games were shifted to Pune, fans were really upset. So we requested the CSK management board to give us discounted train or flight tickets to go watch the game or even reimburse tickets for the matches shifted out of the city. We suggested they get us one or two coaches to take fans to Pune. But the board went one step ahead and sponsored an entire train for us,” said Prabu, a member of the CSK fan club who initiated the idea. Fans who got to go to Pune on the Whistle Podu Express were carefully selected by the CSK fan club heads, which includes Prabhu, CSK superfan Saravanan Hari and joint secretary Sriram.

“We picked 20 fans from Twitter who had bought tickets for the CSK vs Rajasthan Royals match which was shifted out of Chennai, after verifying their tickets. Our fan club conducts blood donation drives and we even visit orphanages during Dhoni and Raina’s birthdays. We picked those fans who regularly attend these events. Out of this, over 70 were those who attended the blood donation drives. Fans were chosen and the name list was put out within 24 hours as we got the permission on such short notice,” says Prabhu.

Prabhu adds that the club was careful in choosing those fans who had never had a chance to watch a match live.

The special train will take fans to Pune to catch the game on Friday evening and will bring them back to Chennai the next day.

Further, the board has even promised to sponsor the stay and other facilities for fans during the trip.

On hearing this news, CSK fans took toTwitter to celebrate.

One person tweeted, “You can take CSK out of Chennai but you cannot take Chennai out of CSK,” along with a picture of excited fans waiting to board the train.

“CSK is very close to our heart. There are many passionate fans who travel to watch the team live and most of them were even willing to pay for the tickets if the board discounted them. Now fans are elated with the CSK board’s gesture,” says Prabhu.