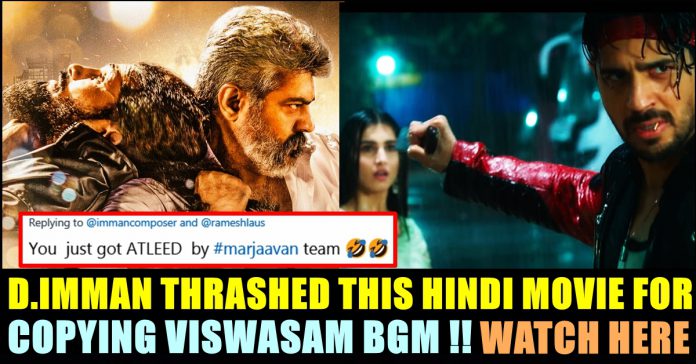 However, one of the leading music directors of Tamil films D.Imman is not happy with the trailer as it contains the Background score of his recently composed movie Viswasam. The film which became a blockbuster had Thala Ajith Kumar in the elad and the BGM is very much popular among the fans of Tamil cinema. The theme exactly starts at the fourth second of second minute.

Expressing his disappointment, Imman in his official twitter account wrote “Totally Not aware of the #Viswasam Bgm score used in the hindi trailer #Marjaavan No prior notification from the production house nor the audio label”

However, in the description of the trailer’s youtube video, the makers of Marjaavaan gave credit to the composer and said that it was licensed from movie Viswasam.

As soon as the tweet of Imman surfaced, fans started reacting to it. Check out some of their comments below :

In softer tone if i say, the production house are robbers….!!!!

If any youtuber would have done the same copyright strike direct….!!!!

Viswasam became one of the successful album of D.Imman and the background score lauded by the fans as well. The film marked the fourth collaboration of director Siva and Ajith.