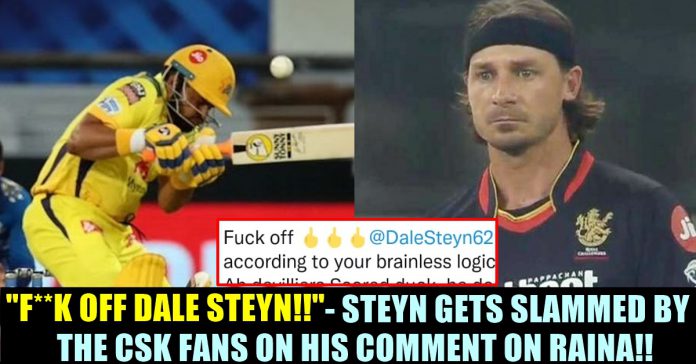 Dale Steyn, the South African cricketer has made a comment on Suresh Raina’s performance in the IPL match between Mumbai Indians and Chennai Super Kings past Sunday. This has made the fans yell out at Dale Steyn. Fans have extended their support to Chinna Thala.

Suresh Raina was out for 4 runs. This has made the South African bowler Dale Steyn react in an unexpected way and has made several remarks on the player. Dale Steyn said, “Boult started really well. That ball especially to Raina. He ran in and set that aggressive leg-side field. And you could see immediately that. He (Suresh Raina) didn’t want anything of it. He looked like a schoolboy cricketer at a point. I couldn’t believe this was an international player doing what he was doing, almost embarrassing that he broke his bat and got out. Had that gone for six, maybe I won’t have said that but it is what we saw,” in an interview with ESPNCricInfo.

"he looked like a school boy cricketer"
Dale Steyn on Suresh Raina. pic.twitter.com/9WkNiCMvyW

Many fans of Suresh Raina have reacted to this criticism made by Dale Steyn.

KJK has commented, “@DaleSteyn62 because of your stupidity, the legend #ABDevilliers lost a golden opportunity to lift the world cup.. but you let your entire country down in that last over & now you comment on everyone as if u are a champion. #Raina won us 2-3 matches in Worldcup. But you ??.” Here are some similar reactions.

If you want criticism our CAHMP Raina but do not degrade him like saying old school boy cricketer.
Dale Styen one of the greats and should use proper words to criticise@DaleSteyn62 #raina #SureshRaina #Yellove #WhistlePodu #IPL2021 #IPL

Have a look @DaleSteyn62 your mate played cricket like a old school Boy,who was not ready to play a Yorker ball,from the one of medium bowlers.
Show some respect to our CAHMP @ImRaina
He is 2nd highest run getter in #ipl
He need some match to come in#raina#WhistlePodu #Yellove https://t.co/cyfGGW6b4I

@DaleSteyn62 because of your stupidity, the legend #ABDevilliers lost a golden opportunity to lift the worldcup.. but you let your entire country down in that last over & now you comment on everyone as if u are a champion. #Raina won us 2-3 matches in Worldcups . But you ??.🤣🤣 pic.twitter.com/4264tFlnxD

Fuck off 🖕🖕🖕@DaleSteyn62 according to your brainless logic, as Ab devilliers Scored duck ,he don't even know How to hold the Bat. and As Siraj scored More ,Siraj is Better batsman than Ab devilliers.#Raina @ImRaina comeback strong champ, these guys should shut their fuck Up

Raina just One Innings ,that your fans should be proud off

U should show what and how a international cricketer will be to a school boy jokes commentator. #CSK #Raina pic.twitter.com/iDeLdCSeCx