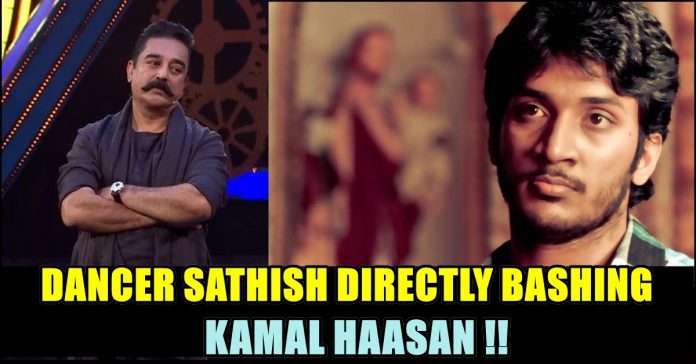 On Sunday’s episode of Bigg Boss 2 Tamil, the housemates were in for a huge shock. One of the strong contenders inside, Sharik, got evicted from the house after receiving lowest votes, thereby saving Mahat, Mumtaz, Balaji and Ponnambalam who were also nominated. The housemates initially were not ready to accept this. Janani Iyer, who nominated Sharik feeling he would be safe, felt that this eviction was her fault. Balaji, on the other hand, offered to leave the house instead of Sharik. Aishwarya, one of the closest to Sharik, was in tears and she requested the audience to reconsider. Host Kamal Haasan explained that once audience had decided, no one can change it. He also told the housemates that this was a lesson for them as they took nominations too lightly. Sharik gave his friends some of his things to remember him by before he left the house. Mahat, Yaashika, Aishwarya, Mumtaz and Janani Iyer were the most affected by this eviction. Sharik came on stage to join his mother, actor Uma Riaz, who said that she was proud of the things that he learnt in the house. Sharik also stressed that he didn’t know how to make tea before he entered the house but now he knew to make a proper meal. His mother explained how she was hooked to Hotstar and she knew what her son was upto all the time. She also told Kamal, her mentor, that she would want to enter the house as a wild card entry just to get back at the housemates in the house. She said, “vechu seyanum sir (I need to take revenge)”. Kamal found it hilarious and so did the audience. Sharik was chosen as the captain of the house, but because he was evicted he chose another captain to lead the house. He chose Yaashika because she knew what kind of captain Sharik wanted to be, so he felt that she would be able to keep that in mind and take care of the house. Everyone in the house wished him luck for his future and bid goodbye to him.

So many online media users opened their thoughts on the show while the show was streaming. Dancer/Actor Sathish is one of them. Sathish being a big time Bigg Boss follower he expressed his views on several issues of the show. Earlier he showed his uttermost hatred towards Aishwarya for her behaviour in the dictatorship task. The way she disrespected Balaji and Rithvika while doing the task made him hate her literally. Through his tweets it is evident that he expected that Kamal Haasan will thrash Aishwarya for her behaviour. Though he asked Aishwarya about the task and her behaviour Sathish not convinced it seems. His series of tweets expressed that he literally hated the way Kamal hosted it. He thought that Kamal using the stage only for his political forum. Check out his tweets here :

Waste episode no sorry nothing no one realised anything hmmmmm . People watch the show sitting there aimlessly clap. Reality totally missing.

Check out some of the fans reaction to his tweets :

what do u expect to do. she is young and its language problem. he only do advice. Harsh criticism is unnecessary. #BiggBossTamilSeason2 #biggbosstamil2 #BigBossTamil2 @vijaytelevision

@dancersatz U think scolding some1 who doing mistake is the ent. I dont think @ikamalhaasan has rights to scold in public show and he knows it well. He is here to expose how a common audience relate to each char. V r nt watching any serial here adiDa UthaiDa level #BigBossTamil2

Bro…. people are not fools…..they got the exact answer what they needed from Kamal sir ….even they have seen the whole show like us…they would have scolded Aishwarya even badly like all did…but at the end they got clarity on the issue…. please think bro

Do let us know what do you think on this !!