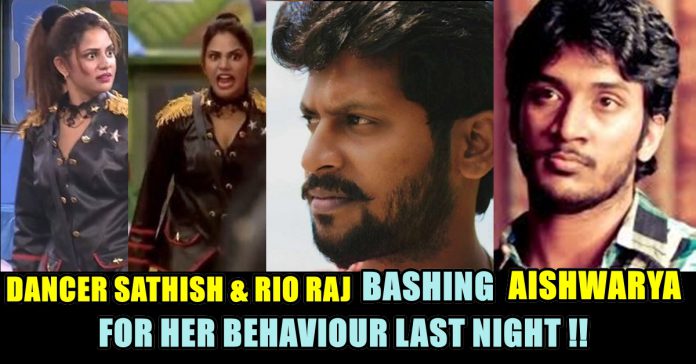 On Tuesday’s episode of Bigg Boss Tamil, the contestants took part in the nomination task. The contestants had to pick pictures of two contestants whom they wanted to nominate and then shred them. At the end of the process, Ponnambalam, Mumtaz, Mahat, Riythvika, Balaji, and Sharik were nominated. After the nominations, the housemates were given the weekly task. Aishwarya became the dictator, Janani became her minister and Daniel became the commander. Bigg Boss sent Aishwarya, Daniel and Janani to a secret room where they were showed what others were saying. They saw Balaji speak ill of Aishwarya and demean her. So Aishwarya punished him by dumping trash on his head. This left the house stunned and Mumtaz ended up crying.

Daniel and Janani asked Aishwarya not to be rude and insensitive but Aishwarya looked like she was on a rampage. She also dumped the belongings of Ponnambalam, Sharik and Riythvika into the swimming pool. As Balaji sat stunned at the same spot where he was punished with trash around him, Aishwarya got Sendrayan to curse him with abusive words and also told him to clean up the area near Balaji.

Aishwarya was angry as Balaji had again used innuendo about Yaashika, Shariq and her. She told Daniel and Janani that all she wanted now was to get back at Balaji. She said she is also ready to leave the show but she wanted to make sure that Balaji got what he deserved. The show created massive outrage among Bigg Boss viewers including celebrities.  Choreographer/ Actor Sathish who was initially known for winning the title in the T V dance show “Maanada Mayilada” seems to be a big follower of Bigg Boss. He was widely known for his appearance in Gautham Menon films like “Achcham Enbathu Madamayada” and “Varanam Aayiram” as protagonist’s friend. He is now choreographing for many leading actor’s films such as Ajith, Vijay etc. About the on going issue in Bigg Boss house he wrote his opinions in his twitter account. In a series of tweets he showed a big time hatred towards Aishwarya and her behaviour in the Yesterday’s show.

Bigboss this is too much . Aishwarya using language yesterday she spoke about balaji using it . There is a limit .

Jus because she has the power to rule the house there is a limit .i really don like janani n Danny to do things saying it’s a game . Respect Mumtaz for speaking up

If balaji speaking bad words is the problem why u keeping him inside the house . Everyone speaks . But janani , Danny n Yashika 👎

The dancer also seen involving in arguments with the fans who came in support of Aishwarya.

Rio Raj who is known for his witty speeches at reality shows of Vijay Television showed his disappointment towards Aishwarya’s behaviour. He wrote “I think even #Hitler had some decency This is crossing a line. More than Aishwarya’s behavior i hate Everyone who just stands around watching it with out stopping her or speaking up. Don’t loose ur Humanity for a simple Task or a game” I think even #Hitler had some decency
This is crossing a line.
More than Aishwarya’s behavior i hate Everyone who just stands around watching it with out stopping her or speaking up.
Don’t loose ur Humanity for a simple Task or a game😠#BiggBossTamil #BiggBoss2 @vijaytelevision

Apart from them Singer Krish also seen the show it seems. He also took his twitter account to question Aishwarya. What do you think on Aishwarya’s activities on Yesterday’s show, comment below !!