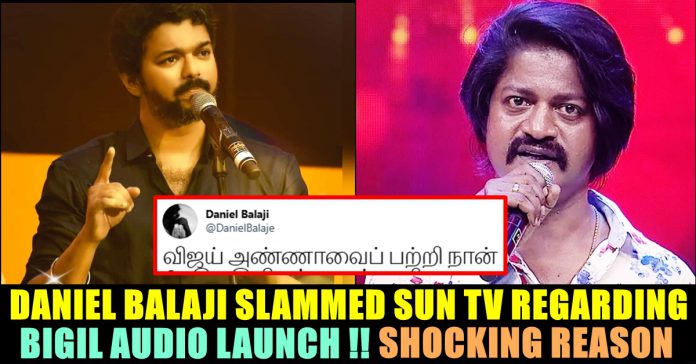 Vijay’s speech in the audio launch of Bigil is talk of the town since it took place. The actor was recently seen at Bigil’s audio launch and even made fans hoot when he went on stage to give his speech. Right from addressing each and every person in the film by their names to requesting fans to use social media responsibly, Vijay struck the right chords with the audience. The actor even spoke about Subashree, a young woman who recently died in Tamil Nadu after an illegally placed hoarding fell on her scooter and killed her. He offered his condolences to the family and asked fans to put hashtags and trends to a better use. The audio launch was officially streamed on Sun Tv during Sunday evening.

Apart from Vijay, co-stars of the film including Vivek also made their speech by praising the actor for his hard work and dedication. Director Atlee, Lyricist Vivek also gave their speech respectively in their own way. Now to our shock, popular actor Daniel Balaji, who is playing one of the “baddy” in the film has came up with an allegation against the Sun Network for removing a particular part of his speech.

On seeing this tweet, one of a fan asked him to share that part of his speech. Here’s how Daniel replied to him :

Daniel Balaji is expected to be seen in this highly anticipated movie of actor Vijay, “BIGIL”, in which he played a role of one of an antagonist. While talking about Daniel Balaji, Vijay, in the audio launch of BIGIL said “Padathula Than Avaru Kaththi, Nejathula romba Bhakthi” (He played a “baddy” in the movie but very devotional in real life). It is notable that Daniel previously collaborated with Vijay in “Bhairava” movie.

Check out some of the replies to his tweet :

Editing is worst. They almost edited all meme questionnaire and reactions of celebrity.

Daniel rose to fame through Kamal Haasan’s Vettaiyadu Vilayadu movie in which he played one of the main antagonist. His first major role was in Kaakha Kaakha as a police officer alongside Suriya, who played the leading role. The film, directed by Gautham Menon, was about a squad of policemen fighting organized crime in Chennai.

What do you think on this allegation of Daniel Balaji ?? Comment your views below !!