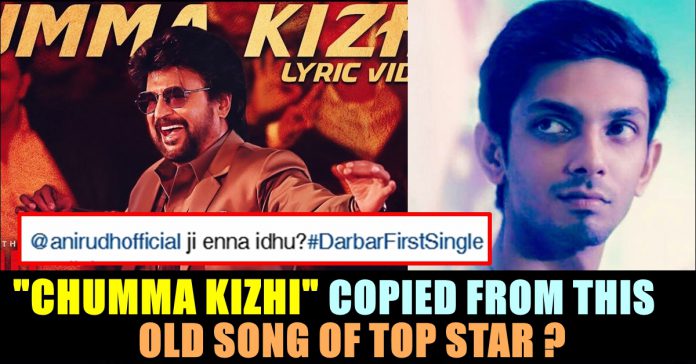 The first single of most awaited movie of 2020, “Chumma Kizhi” has released only to go viral across the Internet. Unlike the other singles of Superstar Rajinikanth’s previous movies, the lead actor himself appears in the single and we can see him lending his voice for the song at the end.

At the end we can also happened to witness Rajinikanth himself saying that the song is going to be celebrated in theatres in big time. As he told the song which was written by Lyricist Vivek and composed by Anirudh Ravichander rocking the Internet with various reactions.

The song which would most probably be the opening song of the film, has the lyrics in a way of celebrating the Superstar. Sung by SPB, it indeed gives the feel of nostalgia to the fans of Superstar who are following him since very long time. The visuals of the 4 minute lyric video also contains few glimpses of the actor shaking his leg for this peppy number.

As one set of people are celebrating the song for what it is, another set of online users started criticizing the song by pointing out the flaws in it. Few felt that there is no rhyme between two lines or local words in the song to connect with the fans deeply.

Few even expressed their disappointment on the song sounding similar to an older song of Top star Prashanth. In his film “Vaigasi Poranthachu”, the song “Thanni Kodam eduthu” sounds very similar to the thematic lines of “Chumma Kizha”. One of a Twitter user tagged Anirudh and questioned him about it.

Another user uploaded a devotional song and compared it to “Chumma Kizhi”. Check out the tweet here :

Darbar, produced by Lyca Productions, is directed by AR Murugadoss. In the film, Rajinikanth will be seen in dual roles – as that of a cop and a social activist. Recently, the makers revealed the motion poster of the Darbar which introduced Rajinikanth’s character as Aaditya Arunasalam.

What do you think on these comparisons “Chumma Kizhi” is facing ?? Comment your views !!