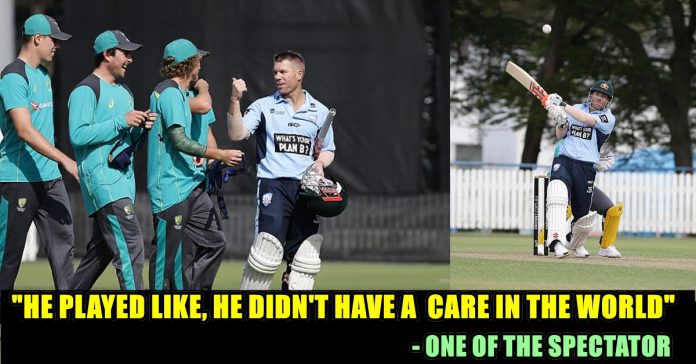 David Warner seems to have finally left behind the scars of the infamous ball-tampering scandal that rocked cricketing world during Australia’s tour of South Africa in March this year.

Playing for the first time after being slapped with a 12-month ban for masterminding the entire ball-tampering episode, Warner blazed away to a stroke-filled 130 against the Australia National High Performance squad in a practice T20 match at Brisbane’s Allan Border Oval on Thursday. According to a report in Mail Online, the southpaw’s innings was watched by one of the spectators, who appeared quite impressed with the performance of the Australian opener. Warner batted for the entire session during the innings and hit some lusty blows.

‘I think he hit like 18 sixes… at least half a dozen went over the grandstand. ‘It looked like he had left the scandal behind and moved on… like he didn’t have a care in the world,” the spectator was quoted as saying by Mail Online. The spectator, though, added that the bowling attack was no match to the Australian. During his knock, the 31-year-old conjured up an array of eye-catching shots including his trademark reverse sweep.

Post the conclusion of the game, Warner mingled with opposition players and was seen smiling, the report said.

Warner will now look forward to playing in the Global T20 tournament in Canada where he has been roped in by Winnipeg Hawks. The tournament, which is set to begin later this month, will witness Steve Smith’s return to cricket. Like Warner, Smith was also handed over a 12-month ban for his involvement in ball-tampering. Smith will take to the field as one of Toronto Nationals’ marquee players.