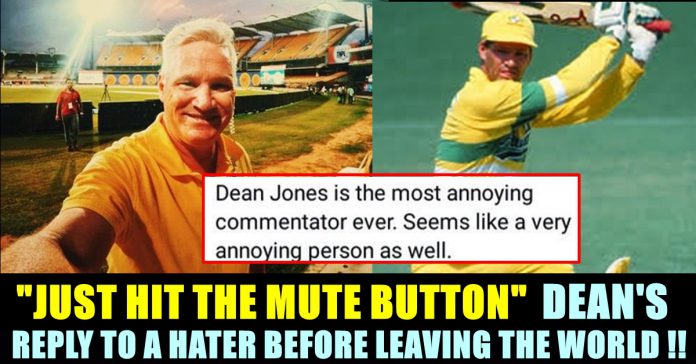 Former Australian cricketer Dean Jones who was active doing commentary for the ongoing IPL tournament, died of a sudden cardiac arrest on Thursday in Mumbai. This news came in as a shock as the entire cricket fraternity left in a dejected state. The man who was in India to fulfill his commitments for the host broadcasters of the Indian Premier League, was 59 when he left the world. Reports suggested that he had a massive heart attack at a hotel in Mumbai after 12 PM on Thursday.

“It is with great sadness that we share the news of the passing away of Mr. Dean Mervyn Jones AM. He died of a sudden cardiac arrest. We express our deep condolences to his family and stand ready to support them in this difficult time. We are in touch with the Australian High Commission to make the necessary arrangements.

Dean Jones was one of the great ambassadors of the game associating himself with Cricket development across South Asia. He was passionate about discovering new talent and nurturing young Cricketers. He was a champion commentator whose presence and presentation of the game always brought joy to millions of fans. He will be sorely missed by everyone at Star and his millions of fans across the globe.Our thoughts and prayers are with his family and friends.” Star sports India said in a statement confirming the demise of the legendary cricketer and commentator.

He was fondly called as “Professor Deano” by his fans and fellow cricketers. Harsha Bhogle, Virat Kohli, Kevin Pietersen and many other cricketers came up with emotional tweets expressing their condolences.

Shocked to hear about the tragic loss of Dean Jones. Praying for strength and courage to his family and friends. 🙏🏻

No, Deano. No. I am speechless. And in shock. And refusing to accept.

Absolutely devastated to hear about the demise of Dean Jones. A colossal loss to the cricketing community. His connection to Chepauk will always be cherished. Deepest condolences to his family and friends. May his soul rest in peace. pic.twitter.com/mDHO0d76d0

Meanwhile, the last tweet of the professor which was posted just 16 hours ago is trending in the micro blogging social media site. The former cricketer replied to a fan who criticized his commentary during the IPL match. The fan said that Dean was an annoying cricketer and demanded Star sports to dismiss him. The user deleted his comment as soon as the news about the Professor went out it seems.

Replying to this harsh criticism, Dean, without losing his nerves, wrote “Glad you are watching… just hit the Squared cool #mute button !”

To this reply of Dean, a follower named as Yasser Khan said that Dean was doing great with his commentary. “Prof, not everyone is used to ANZ ways of flamboyant, loud commentary. If you need commentators to say what is going on on TV, I don’t think that does the job any justice. Grew up watching Lawry, Greig, Ravi Shastri, etc, and you’re doing great. Brings excitement into our homes.” Yasser appreciated Dean.

Dean replied to Yasser with a thumbs up emoji which became his last ever tweet before leaving the world.

Emotional replies are pouring from the netizens for this last tweet of Dean.

Unbelievable to know this was his last tweet. He left us all with a 👍 – encouraging and motivating us to be positive. His services for cricket and to make PSL a great league will always be cherished in Pakistan.

His departure leaves a major gap in cricketing world. 😔

This video is enough to define what kind of humans #DeanJones was.

Rest In Peace. You will be missed Sir! pic.twitter.com/fu64elrGdh

Let us pray for the soul of Dean to rest in peace !!