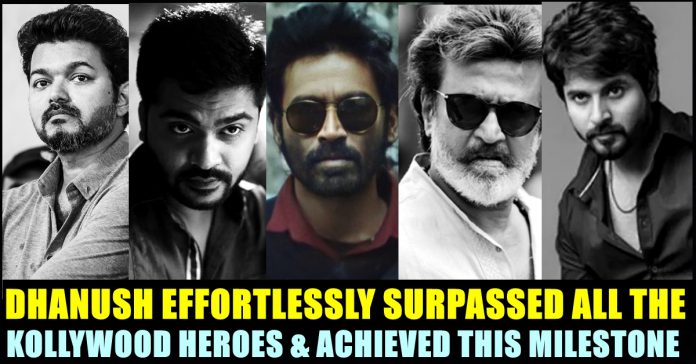 Dhanush became the first Tamil hero to reach 10 million followers in the micro blogging social media site twitter. He surpassed his seniors such as Rajinikanth, Kamal Haasan, Vijay, Suriya and the heroes of his generation such as Simbu, Sivakarthikeyan, Vijay Sethupathi effortlessly. Fans of the “Sullan” actor can’t keep calm on seeing the achievement made by their idol. Wishes pouring from all over the Internet to Dhanush for achieving the milestone.

The actor debuted to Tamil film industry through “Thulluvatho Ilamai” which was directed by his brother Selvaraghavan. The film was released in the year 2002 and he was criticized for his “lean” look at the time. He went on to act in some of the other films of his brother such as “Kaadhal Kondein”, “Pudhupettai”, “Mayakkam Enna” and nurtured himself as a performer. Today, Dhanush is one of the most wanted versatile actors of Kollywood film industry. National award winning filmmaker Vetri Maaran played a huge part in the growth of Dhanush, with whom the latter collaborated in four movies as an actor so far.

He who enjoys a huge fan base in Tamil nadu, went on to make his debut in Bollywood through “Raanjhanaa” and became a pan Indian actor by sharing screen space with Amitabh Bhachchan in “Shamitabh”. Dhanush who also worked in an International project, is going to be appeared in “Grey Man” with Hollywood actors Ryan Gosling and Chris Evans. “Avengers” fame Russo Brothers are directing the “Netfliz” project.

Superstar Rajinikanth has 5.9 million followers in Twitter whereas Ulaganaayagan Kamal Haasan has 6.8 million followers. Sivakarthiekyan, Simbu and Vijay Sethupathi are enjoying 6.6 million, 2 lakh 50 thousand, 1.9 million followers respectively. Check out some of the wishes and reactions being received by Dhanush for achieving the milestone :

Getting 10 million followers is no easy 💯
Such is the reach of @dhanushkraja Anna ❤️😎#10MillionFollowersForDhanush#Karnan pic.twitter.com/IArDFPa5ZQ

First kollywood actor ever to reach 10 Million followers in twitter 😎💪

First Actor From Kollywood To Reach 10 Million Followers on Twitter 🤩