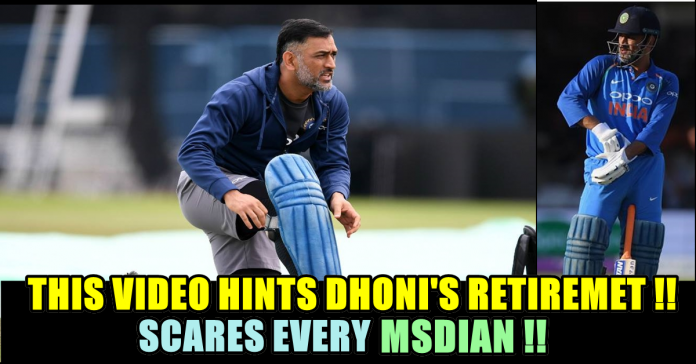 The 3 match ODI between India and England finally ended and the latter enjoyed an 8 wicket victory in Leeds in the 3rd match.

England won the series 2-1; Indians were very sad over the loss but they got one more reason for being disappointed. We all noticed one gesture of Dhoni, which made us feel that he is retiring from all forms of International cricket. Something unusual was seen while the teams were returning back to the dressing room after the end of the match. MS Dhoni was seen taking the match ball from the umpires which have put the doubts in the mind of the fans. Yes, as soon as he post match footage was out, Twitter got divided. Well, a video of Dhoni in which he took the match ball from umpire before going to the pavilion was surfaced online. Now that he took the ball back, fans started thinking that he’s all set to announce his retirement. Some believed that he’s retiring from ODIs while some thought that it was his last International match.

Here’s the video of the MS Dhoni taking the ball from umpires after the game. #ENGvIND pic.twitter.com/C14FwhCwfq

Here’s what fans reacted for his reaction :

Stop trying to spread fake news. He is not retiring unti he announcrs himself

@msdhoni is having an undeclared agreement with @imVkohli, team management and @bcci to continue till WC2019. companies with endorsement also want him to continue.

It do not matter how India fair in WC. Individual interests weight more than nation thank to mindless hero worship

Do you think Dhoni will really retire? Was this his last ODI?