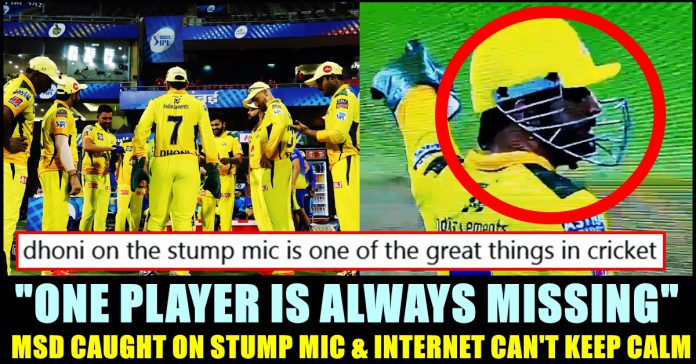 Wicket keepers getting caught on stump mic is not something new to the fans of game cricket. But when it comes to MS Dhoni, it is always special as he is known for providing some valuable instructions to the spin bowlers to trap the batsmen. On the 12th league match of IPL tournament between Chennai Super Kings and Rajasthan Royals, MS Dhoni caught giving a funny comment while keeping the wickets.

The former Indian cricketer, while setting field, wondered that one fielder is always missing from the ground in a humorous manner after missing his count and the video has grabbed the attention of social media.

Team Chennai Super Kings registered their second win in the ongoing IPL tournament by defeating Rajasthan Royals at Mumbai’s Wankhede. After scoring a competitive total of 188 runs in the first innings, bowlers of the Dhoni-led team managed to restrict the opposition for just 143 runs and climbed to the second spot of the table.

Dhoni, despite of his poor batting, managed to help the team through his captaincy. His suggestion to Jadeja from behind the stumps to pick Butler’s wicket is being lauded by the cricket experts and fans.

When butler hit jadeja for a six and then ball was replaced , you could hear dhoni on the stump mic saying that the ball will turn because it’s dry … that’s exactly what happened !! #ipl2021 #csk

Meanwhile, a video of the CSK’s skipper getting caught on stump mic while making a casual comment has grabbed the attention of social media platforms. During one of Jadeja’s over, Dhoni, after setting field at the fine leg region, looks for a fielder to make him stand in the square leg. After looking around the ground, the world cup winning captain says “Ek player gayab ho jatha hamesha” (One player is always missing from the field) before finding one to field at the spot he wanted.

Many of the fans who noticed it, jokingly said that Dhoni forgot to count himself and complaining about it. Tweets embracing the cricketer’s candid moments surfaced in the micro blogging social media site as well.

The Best Thing I Heard Today Is Dhoni's Voice From The Stump Mic.#CSK #MSDhoni

#IPL #IPL2020 #AskTheExpert Sorry but when dhoni is behind stumps we don't need commentators.
Stump mic is enough